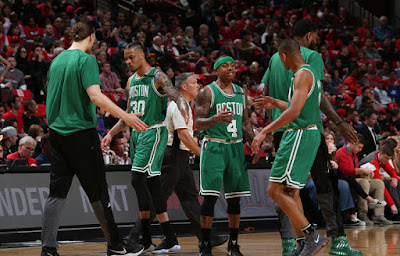 Behind an efficient offense and stellar shooting, the Celtics won their first game of the opening round series.

Much like we saw in Game 2, the C's jumped out to a quick lead (14-4) but this time, built an 18-point advantage by the end of the opening quarter. Jae Crowder got off to a hot start -- he scored a quick 10 points, including back-to-back 3-pointers along with Al Horford.

The quick start was followed by Chicago's best quarter -- where they outscored the Celtics, 26-11, to pull to within three before the break. But the Celtics caught fire in the third quarter and the offensive touch rolled over into the fourth.

The C's drained a whopping 17-of-37 from behind the arc while five players scored in double figures.

Horford led the way with 18 points and 8 rebounds to go with his 6 assists and four steals, Crowder and Isaiah Thomas (game-high nine assists) each finished with 16. Avery Bradley added 15 points on 5-of-10 attempts, including 4-of-6 from deep and Terry Rozier's 11 points led the bench.

Horford was heavily involved in the Celtics' offense, moving the ball, setting pick-and-rolls and finishing strong down low. After scoring six points, Thomas found his offensive rhythm in the second half -- where he scored 10 points, including 2-of-4 from behind the arc.

On the defensive end, the Celtics picked up their intensity in the third quarter, especially on Jimmy Butler. Crowder did an excellent job of pestering the All-Star guard -- who finished shooting at a 33.3 percent clip on 7-of-21 attempts.

He finished with 14 points but never found the scoring touch that torched the Celtics in the first two games of the series.

Dwyane Wade was on fire in the first half -- where he nearly scored all of his points. Wade scored 14 of his 18 team-high points by halftime and didn't provide the kind of spark the Bulls needed to erase their second-half deficit.

Big men Robin Lopez (12 points) and Nikola Mirotic (11 points) combined for 23 points on 8-of-14 shots. The Celtics coerced the Bulls to commit 17 turnovers while the Bulls shot less than 40 percent (39.3) for the first time in the series.

Celtics will look to even the series on Sunday in Chicago before heading back to Boston for Game 5.