Rajon Rondo out of arm cast, could return after Game 5 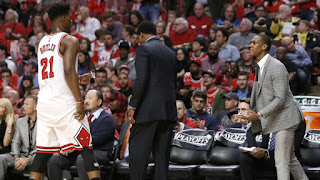 Rajon Rondo has been ruled out for Game 5 in Boston on Wednesday, but Games 6 and 7 still remain open.

Rondo, who injured his right thumb in Game 2, had his hard cast removed this week and was taking jump shots on Tuesday before team practice.

He was initially expected to miss seven to 10 days -- ruling him out for the rest of the series -- but after the Bulls dropped two straight in Chicago and are now on the verge of falling behind, 3-2, in their best-of-7 series against the Celtics, the Bulls could turn to Rondo for help. However, Bulls head coach Fred Hoiberg is calling a potential comeback against the Celtics unlikely, but stated if there's one person who can pull it off it's Rondo.


"This is honestly the first time he's touched a basketball with that right hand," Hoiberg said. "We'll see. We'll see how it goes. He's going to continue to condition and do everything that he can. He was in the weight room yesterday getting a good session in there. It was his first time back in the weight room. He's just getting this whole process started.

"Just watching him wince a little bit when the ball was coming to him makes me think it's a longshot. But if there's anybody who can do it and will try to fight through it, it's Rondo because of the competitor he is."

If the Bulls were to fall behind 3-2, it'd be hard to envision Rondo sitting on the bench in street clothes given the Bulls haven't won a game in this series without him. One thing's for sure is Rondo will not play in Game 5 but the rest of the series is still up in the air.

Rondo averaged 11.5 points, 10 assists and 8.5 rebounds in Game 1 and 2 before he was forced to sit out the rest of the series.