Isaiah Thomas to play in Game 2, according to Brad Stevens 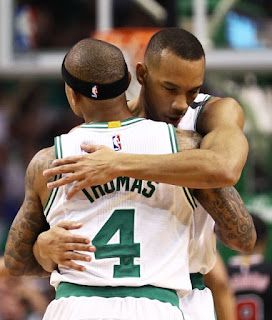 After a gutsy emotional performance from Isaiah Thomas in Sunday's 106-102 loss to the Bulls, Celtics coach Brad Stevens said Thomas will play in Game 2 on Tuesday before traveling to Tacoma, Washington to be with his family.

The Celtics leading scorer led his team with 33 points on Sunday -- an incredible night for a guy who lost his 22-year-old sister one day prior to Game 1 -- and plans to help his team knot tie up the series at one game apiece. Thomas stayed with the Celtics for Monday's practice before revealing his plan to stick around for Tuesday's Game 2.


"His plan, as of right now -- and, again, subject to him changing if he wants -- is that he'll be here [Tuesday] night and then will go to Tacoma after," Stevens said. "So either after the game [Tuesday] night or Wednesday morning."

Following Sunday's game, Stevens informed the media that the decision for Thomas to play in Game 2 was entirely up to Thomas and that the team would support whichever choice he made prior to Tuesday's game.

Was there a timetable for when Thomas needs to let his team no if he plans to play or head home to be with family?


"No, I told him [I'm] not going to ask him or make him make those decisions," Stevens explained. "They've got to come on his own time and then we'll adjust accordingly."

Avery Bradley, a Tacoma, WA native, grew up in the same neighborhood as Thomas and continues to stick close to his teammate throughout this rough time.


"Isaiah is, to me, he's family," Bradley said after Sunday's loss. "We grew up in the same area. I know it's tough for him. It says a lot about him. It says he's a true competitor. I know tonight he was playing for his sister. He was playing for his family. We appreciate that as teammates. He is just an amazing basketball player and a better person, so I'm happy with the way he played tonight and we just have to continue to fight for him."

Thomas' game-high 33 points in Game 1 was his second career 30-point game in the postseason. He led the Celtics with a game-high 42 points in a 111-103 win on April 22 against the Hawks at TD Garden in Game 3 of last year's first-round series.