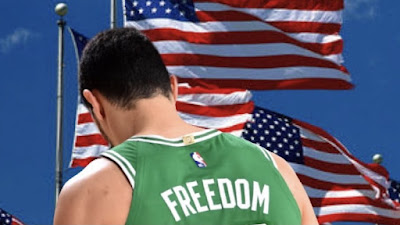 Enes Kanter has not only officially changed his last name to Freedom, but the Celtics center also became a U.S. citizen.
Enes Kanter Freedom spoke to the media about the milestone and what factors went into the decision to legally change his last name to a word he' chose to wear on his back during the 2020 Orlando Bubble.


Freedom, born in Switzerland but raised in Turkey, was sworn in as a U.S. citizen Monday afternoon using his new name at Boston's Joseph Moakley Courthouse.

"It was obviously amazing, a dream come true," Freedom said Tuesday of his nationalization. "After I got my green card when I was with the [Oklahoma City Thunder], the last six years have been tough. It's been very rough because the Turkish government put my name on the Interpol list, and they revoked my passport. So it's been rough but it finally happened. I’ve been waiting for this moment since the day I stepped into America. So definitely one of the most unforgettable, maybe the most unforgettable moment that I've had in my life."

Over the past few years, Freedom has brought attention to violations of human rights, especially in Turkey, where he was accused of family terrorism in 2017. Over the past 20 months, he has used being a celebrity athlete as a platform more than ever to spread awareness via social media, television appearances and even joining a protest in person to show his support in the fight for systemic justice right here in the United States.

"The more research I have done, I have seen the human rights violations that are happening not just in Turkey, but all over the world," he said.

Freedom recalled a conversation back in 2009, when he overheard a teammate criticize the U.S. president at the time, and the Celtics big man remembers clearly being "very scared" for his teammate and possible consequences regarding the comments made.

For the media personnel made available that were in attendance or participated through Zoom Tuesday following the Celtics' practice, Freedom put things into perspective by taking it a step further on what is not 'allowed' to be written and or said in other parts of the globe, when it comes to the press.

"You guys are doing your jobs, but some people, your colleagues overseas in many countries, especially in the Middle East, just because they're doing their job, they're in jails," Freedom explained. "Especially people in Turkey, there (are) so many political prisoners; there (are) so many journalists in jail right now."

While it doesn't appear that Freedom will be slowing down anytime soon as a human rights activist that wants to affect change by using his voice, which has been far from being silent in the least bit since the start of the 2021-22 NBA season. He's recently called out the Chinese government and even those who currently have business ties with China, like Nike, LeBron James and Michael Jordan, just to name a few.
Freedom has even used his sneakers as an opportunity to promote a movement against China, while also calling out James -- by using an image of the Lakers forward surrounded by bags of money and bowing down to a animated drawing of Xi Jinping. The Celtics center has also worn sneakers throughout the year so far with messages such as "Free Hong Kong," "Free Tibet," and "No Beijing 2022," among other anti-Chinese government statements.
James, who responded to Freedom (then still known as Kanter), after a Lakers' blowout loss to the Celtics over 10 days ago at TD Garden, believes that his name is being used just to grab attention.

"I don't really give too many people my energy, he's not going to be someone I give my energy too...  he's using my name to create an opportunity for himself," James said during his postgame presser in Boston last month.

But according to Freedom, he would be more than happy to have a conversation to help "educate" James on human rights violations going on in China, contrary to what the Lakers All-Star claimed that took place between the two at TD Garden that night, saying "I seen {Kanter] in the hallway, he blew right by me. He's using my name for his own advantage."

"Sure, I'd love to sit down and talk to him," Freedom said Tuesday about the chance to have a chat with James. "I'm sure it's going to be a very uncomfortable conversation for him. I don't know if he's gonna want that. I'll make that really comfortable for him.

"I don't know if he's educated enough, but I'm here to educate him and I'm here to help him, because it's not about money. It's about morals, principles and values. It's about what you stand for. There are way bigger things than money. If LeBron stopped making money now, his grandkids and grandkids and grandkids can have the best life ever.
"I feel like it's definitely time for athletes to stand up for the things they believe in ... not just in America ... but all over the world."

Of course Freedom also gave his account of the story on the interaction that took place or didn't take place with James in Boston.

"I was actually on the court and after I left the court, he was behind me. ... Then I stopped to take a picture with a kid, and he was the one who walked right past me," Freedom said.

The Celtics will head out to Los Angeles as part of a five-game west coast road trip to face the Lakers once again December 7.
In the meantime, Freedom is happy and proud to say he's got the full support of NBA commissioner Adam Silver on his fight against human right violations.

"I told him if there are any rules that I'm breaking, or I’m violating, let me know. I'll be the first one to follow," Freedom said. "And he said, "No, you're not breaking any rules." And I said 'Adam, you guys are the ones telling us and encouraging players to stand up for what's right -- not just the problems that are happening in America but all over the world. So, you guys are the ones that encouraged me to talk about all the violations that are happening all over the world.
"And he's like, "'Listen, you have the freedom to say whatever you want.'" And I appreciate that."

As for the franchise he currently plays for, Freedom has nothing but positive things to say about a Celtics organization that has made it clear that they stand behind him -- especially when it comes to his teammates, despite criticism from others.

"One thing that I'll give huge credit is to my teammates," Freedom noted. "They've been supportive and they're all like my family with their support. I just have so much hope and motivation to fight and fight for what's right. And the Celtics have been unbelievable too. They've been very supportive as well."

Freedom will officially wear his new legally changed last name on his jersey for the first time Wednesday night, when C's host the Philadelphia 76ers -- two teams that their games ironically don't get aired in China at all for obvious reasons.
Joel Pavón
Follow @Joe1_CSP