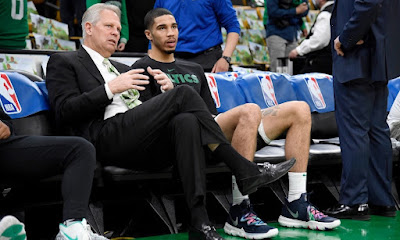 Former Celtics president of basketball operations Danny Ainge has been keeping an eye on this 2021-22 roster and their up and down start to the season.
While in Boston recently, Ainge caught up with Chris Forsberg of NBC Sports about the C's struggles, especially why the team hasn't been able to put together a full 48 minutes of consistency.

"Well, last year, I think we lost more players to injury and COVID than any other team. And I think that's part of it," said Ainge to Forsberg on Wednesday. "This year is the same way. I think one of the most frustrating things about the team has just been -- last year and this year -- just every day you're looking at the injury report to see who's playing. It's just been one guy after another. And when you missing two or three key players each night, it takes a toll."

It has been a little more than six months since Brad Stevens took over the reigns when Ainge essentially stepped down and retired after nearly 20 years as the Celtics president of basketball operations, but according to the man who use to call the shots, Stevens has excelled so far following sevens years at the helm as the team's coach.

"I think Brad's done a great job. I think that getting Dennis Schroder in here this summer was huge," said Ainge. "And Josh Richardson is really playing well for the team right now, especially lately after a little bit of a slow start, but he's playing really well.

"I think that the team -- we have seen what Aaron Nesmith and Payton [Pritchard] could do, they showed us what they could do last year. But there's just so much depth on the team, especially in those wing and outside-shooter positions, that it's tough. It's a tough place to coach because, when everybody is healthy -- but the team is at its strongest when their top guys are all healthy and when Robert Williams and Al Horford and Jaylen [Brown] and Jayson [Tatum] and Marcus [Smart], Schroder, all those guys. When everybody is healthy, the team is good."

When asked about the Celtics two All-Stars of Jayson Tatum and Jaylen Brown, Ainge believes that both will figure it out as the season goes on and whether it's injuries or a shooting slump, it's up to the rest of the roster to help make their lives easier on the court.

"I thought Jaylen started out great, started the season amazing, the best player on the team early in the year. And then the injury happened and he hasn't been the same since. Jayson has had his ups and downs but we know what a great player he is. And I'm not worried.
"People say, 'Oh, Jayson's struggling,' but that's the least of every worry, at least in my mind, about the Boston Celtics. He is going to figure it out. And the question is can the rest of the guys step up and play their roles and take some of the burden off of him?"

Ainge also added that it's a learning process when it comes to implementing a new system and distinguishing new roles.

"It's just like every team goes through this but putting players within the right roles, so they can have the best chance of success and the team can have success, is always the challenge," said Ainge. "With a new coach this year, [Ime Udoka is] trying to figure out who everybody is, and with all the injuries, it's tough to really establish a rotation. So it's been tough. It hasn't been easy. But, I'm encouraged by what the team can be."

Of course with open GM vacancies like in Portland, there are rumors that naturally link Ainge to possible front office jobs, as Forsberg asked if he'd consider an NBA return anytime soon.

"I'm not closing the book on other opportunities but they'd have to be the right situation," Ainge explained. "I'd have to be working with the right people, in the right role. I don't want to get back into 18-hour days. I don't think that's in anybody's best interest, for that matter.
"I know how much work it takes to be good at the job. And, at the same time, I have 40 years of experience in the NBA. And I think I have a lot to offer some team that might see me as a helper to people in the organization. But, yeah, just depending on what the role is."

While Ainge also noted that though he still keeps up with the league and college games, he also has enjoyed his downtime since walking away.

"I'm living in Utah right now and it's a lot nicer because the games start two hours earlier. So I'm not up so late watching games, and I've enjoyed it. I've been spending time with my family and my grandkids and spending more time playing golf and enjoying my friendships, traveling a little bit more. It's been very relaxing," said Ainge.

As far as what would be Ainge's pitch to Celtics fans on not to panic just yet, despite the team hovering around .500 all season long?

"Well, let's get healthy first. That's the first pitch, we really need to get healthy. But I know you can't always wait to get everybody healthy.
"I think it's a good compliment to the team: I watch games every night and I thought [Tuesday] was the best game the Lakers have played, by far, this year. They really played with a passion and you could tell that they did not want to lose to the Celtics again and their defense was intense. They got out and pressured the ball and when Jayson started off the way he did, they weren't gonna let him continue to do that. And I thought the Laker defense and the Laker performance was their best one of the year.
"So that's a compliment, you're gonna run into some of those games. But I didn’t think we played our best game. I didn't think, defensively or offensively, it was one of our best games."

Since this Forsberg interview with Ainge, the Celtics have gone on to lose against the Los Angeles Clippers and the Phoenix Suns to finish their five-game west road trip at 1-4.
Joel Pavón
Follow @Joe1_CSP