Celtic legend, Hall of Famer Sam Jones passes away at 88 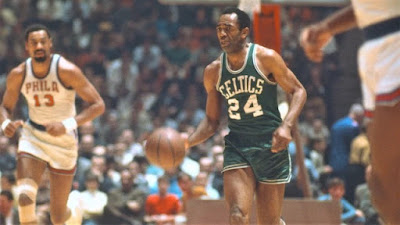 Celtics legend and Hall of Famer Sam Jones passed away Thursday night (Dec. 30th) at the age of 88 due to natural causes, according to a team's spokesperson.
Jones played his entire 12-year NBA career with the Celtics, winning 10 championships between 1957-69. He was one of the three players -- along with Bill Russell and K.C. Jones -- to be a part of the franchise's eight straight title teams. Jones' 10 NBA championships are second to just Russell for the most titles won by a player in league history.

The Jones family is in our thoughts as we mourn the loss of Sam Jones and fondly remember the life and career of one of the greatest champions in American sports.


The two-guard, nicknamed "The Shooter," was a five-time All-Star as Jones averaged 17.7 points for his career, while also earning the "Mr. Clutch" moniker for taking it up a notch in the playoffs. His average increased to 18.9 points in 154 postseason games. Jones averaged at least 20.5 points or more per contest for seven straight postseason runs.
Jones, who many consider as one of the first to use the bank shot, also led the Celtics in scoring at 20 points per game for four seasons and is currently seventh on the franchise's all-time scoring list.
In 1969, Jones was the first Black person to be inducted into the North Carolina Sports Hall of Fame. He was also inducted into the Naismith Basketball Memorial Hall of Fame in 1984. Jones is one of the selected few players to be named to the NBA's 25th, 50th, and 75th anniversary teams.
The Celtics released a statement via Twitter in honor of Jones:

"Sam Jones was one of the most talented, versatile, and clutch shooters for the most successful and dominant teams in NBA history," the statement wrote. "His scoring ability was so prolific, and his form so pure, that he earned the simple nickname, "The Shooter." He was also known as "Mr. Clutch." One of the many testaments to his clutch performances is the fact that his playoff scoring average (18.9) exceeded his regular season output (17.7).
"His number 24 was retired in 1969, the final year of his Celtics career, which of course resulted in an NBA Championship – his tenth. Only Bill Russell won more championships in his NBA career. The Jones family is in our thoughts as we mourn his loss and fondly remember the life and career of one of the greatest champions in American sports."

Former Celtics legend Cedric Maxwell was the first to report the sad news, calling Jones his friend and a wonderful person.

Another one of my dear friends lost. Well, the banks are open in heaven this #NYE.

RIP to fellow NC native, a legendary player, a 10x champion w our @Celtics, and a wonderful person.