Jayson Tatum responds to recently being called selfish: 'It's not true' 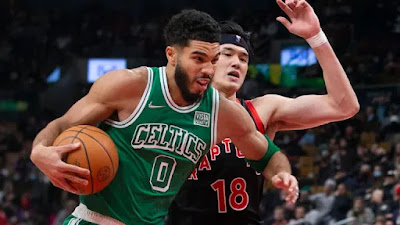 Jayson Tatum continues to prove his naysayers wrong, despite the slow start to the 2021-22 NBA season.
Following an 88-87 win over the Philadelphia 76ers, Tatum addressed a recent ESPN article that quoted an anonymous assistant coach that called the All-Star forward selfish.

"Jayson Tatum is about Jayson Tatum," an Eastern Conference assistant coach told ESPN's Tim Bontemps. "I don't think he cares about winning now, and if he does, it is on his terms.

Tatum acknowledged the report in his postgame presser after dropping 26 points and grabbing 16 rebounds.

"I saw a report the other day that said I was a selfish player. That seems pretty unselfish of me. Whatever it takes for us to win," Tatum said Wednesday night.

He further elaborated a bit more on his thoughts about the ESPN piece with Jay King of The Athletic.

"I laughed," Tatum said to King. "I think when people get upset or you get a reaction out of somebody, it's probably because they feel like it's kind of true. But I just laughed because I know it's not true. I know my teammates, my coaches, anybody I've ever been around, selfish is the last thing."

Celtics president of basketball operations Brad Stevens came to the defense of the young star during his weekly radio appearance, calling the comments "absolutely ridiculous."

"There is no way that assistant coach would put his name on that quote because, first of all, he has never been around Jayson," Stevens said on 98.5 The Sports Hub's "Toucher & Rich" Thursday morning. "And, secondly, Jayson would kill him every time he played him for the rest of his career. That's the way those guys in this league are wired.
"I actually sent a note to one of the people I work with like, 'This is idiotic.' Just be around this guy every day. That guy loves to win. He's sitting there with his feet in the ice bucket after every game that we lose and he looks despondent. This guy’s competitive. I know that for a fact. I'm glad he's on our team."

Tatum was also not pleased that the reported assistant coach's quote was an anonymous one.

"I saw what Brad said, and I wish I did know who said it," Tatum told King. "But I guess that's the time we live in. A lot of anonymous people, a lot of anonymous quotes, that I'm sure that person would never claim that they said it. But when you're in the position that I’m in, a lot of people have a lot of things to say about you. You take it with a grain of salt and you move on."

Despite leading the team in scoring this year, Tatum has taken a noticeable dip in shooting percentage from a season ago. His field goal is down from 45.9% to 40.6%. His 3-point percentage has dropped from 38.6% to 32.2%. His free-throw percentage is also taking a dive, going from 86.8% to 83%. Tatum now leads the league in missed field goals, affecting his scoring to go from 26.4 points per game to 25.2 points per contest so far this season.
Tatum's assists are also slightly down, going from 4.3 assists per game last season to 3.7. While nearly all his numbers across the board have lowered, Tatum still feels like he's made "great strides" as a playmaker over the first 24 games.

"The more attention I get from the defense, getting the team's best defender, they're top-locking screens, they're blitzing, they're showing and hedging, doubling in the post. Just always make the right read, find guys," Tatum explained to King. "I think I really haven't forced any shots throughout the double team or stuff like that. Obviously, I could be better at things. But it's just all in the flow of the game. Sometimes you've gotta be a little more aggressive. Sometimes, shit, if they just keep doubling or they deny you the ball, you catch it and make a play for somebody else."

The Celtics are 1-1 to start their five-game west road swing, following a loss to the Utah Jazz 137-130 Friday and a victory over the Portland Trail Blazers 145-117 the very next night. Tatum is averaging 33.5 points on 46.6% shooting so far on the trip. Boston will need some more consistency from their All-Star, especially if Jaylen Brown remains out with a hamstring strain.
At 13-11 on the season, the C's face the Lakers and Clippers in Los Angeles on back-to-back nights beginning Tuesday.
Joel Pavón
Follow @Joe1_CSP