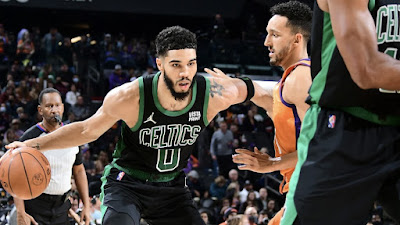 The Celtics fell to the shorthanded Phoenix Suns 111-90 Friday night at Footprint Center to lose their third straight and fourth over the last five games.
Jayson Tatum led all scorers once again, but this time with only 24 points on 10-of-25 shooting, including 1-of-7 from deep. Dennis Schröder added 15 points and Robert Williams III chipped in 10 points for the Celtics, who are below .500 again at 13-14 on the season.

"It was kind of like a snowball effect," Tatum said in his postgame presser. "One turnover, one miss, it just built and built. Instead of moving on to the next play, we kind of let it carry over. We let our offense affect our defense and then they got rolling."

Boston, playing without Jaylen Brown (hamstring) and Josh Richardson (Health and Safety Protocol), shot 4-of-26 from behind the arc.

"You still have to play with proper respect and effort," Celtics coach Ime Udoka said. "We didn't do that the last two games."

The Suns, were without All-Star guard Devin Booker (hamstring) and big man Deandre Ayton (non-COVID illness), finished with seven players scoring in double-digits, led by JaVale McGee's 21 points and 15 rebounds. Cam Payne had 17, Jae Crowder and Cameron Johnson each scored 16 points apiece, while Chris Paul recorded a double-double of 10 points, 12 assists for Phoenix -- winners of 20 in their last 21.
The Celtics trailed 25-24 after one before getting outscored 32-15 in the second quarter and it was all down hill from there, as the deficit ballooned to 57-39 at the break.
Phoenix led by an many as 27 before taking an 84-69 advantage into the final frame and pushed their lead to 20 points early in the fourth to grab the win and are now 21-4 on the year.
While neither team shot particularly well, Boston was 35-of-93 (37.6%) and allowed the Suns to hit 43-of-96 (44.8%) overall, 14-of-38 (36.8%) from 3.
The Celtics wrapped up their five-game west road trip with a 1-4 record, as they'll return to the TD Garden to host the reigning league champion Milwaukee Bucks (17-10) Monday night.