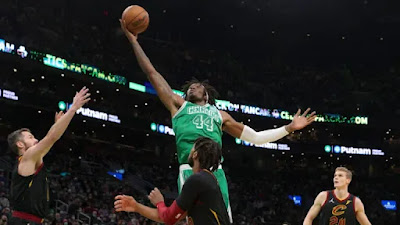 The Celtics wrapped up their five-game homestand with a 111-101 win over the Cleveland Cavaliers Wednesday night at TD Garden.
Jaylen Brown led all scorers with 34 points on 12-of-22 from the field and 5-of-10 from deep, while Robert Williams returned from his absence against the Philadelphia 76ers to record a career-high 21 points, 11 rebounds and seven assists in 34 minutes.

"Tonight was taking advantage of the coverage," Boston coach Ime Udoka said about Brown. "He had some big guys on him."

Brown scored at least 30 points for the second straight game since coming back from his latest stint on the disabled list with a hamstring strain.

"It's one of the better days I've had since I've been back," said Brown during his postgame presser.

Jayson Tatum added 18 points, nine rebounds, five assists and Romeo Langford chipped in 11 points, nine rebounds as a starter to help improve the Celtics to 16-16 on the season.
Boston, who had seven players in the NBA's Health and Safety Protocols, signed 17-year veteran Joe Johnson just hours before tip-off. The crowd broke into "We Want Joe!" chants before Udoka obliged with 1:57 left to play and Johnson hit a vintage midrange fadeaway jumper to get the loudest cheer of the night.

"A lot of memories," said Brown of watching Johnson play for the Hawks when he was growing up in Georgia. "A lot of playoff runs. In Atlanta, I got to go to a lot of those games."

Darius Garland led a shorthanded Cavaliers roster -- missing three starters and five other players to COVID protocols -- with 28 points and six assists. Kevin Love notched a double-double of 18 points, 12 rebounds and Cedi Osman added 13 points for Cleveland, who fell to 19-13 on the year.
Brown netted 20 points in the first half for the Celtics, as they were up 63-48 at the break and pushed their lead to as many as 23.
The Cavaliers used a 15-4 run to close out the third quarter to trail 85-73 heading into the final frame and cut their deficit to 10 before Boston used a 8-0 run, which was sparked by a loud Williams' dunk that eventually led to both teams to emptying their benches -- as the Cavs got a six-game win streak snapped.

"I told them don't get bored with what makes us successful," said Udoka about his team keeping a double-digit lead in the fourth quarter.

The Celtics go 3-2 on their homestand and will have a couple of days off as they head to Milwaukee for another matchup with the Bucks (20-13) on Christmas Day. ABC has the tip-off at 2:30 PM ET.