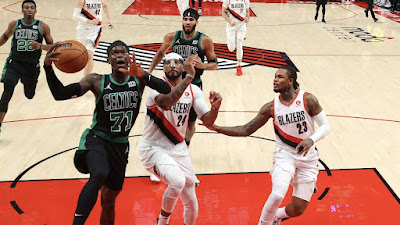 The Celtics bounced back from a tough loss in Utah to beat the Portland Trail Blazers 145-117 at the Moda Center Saturday night.
Jayson Tatum (10 rebounds) and Dennis Schröder (eight assists) each finished with 31 points apiece, as Boston's 145 points were the most scored in regulation by an opponent in Blazers history.
The Celtics led by as many as 21 points in the first half after hitting 14 of their first 15 shots to start the game. Coach Ime Udoka credits Tatum, who scored 37 points against the Jazz, for his recent offensive burst on attacking the rim.

"He's had some success driving to the basket and getting to the free throw line," Udoka said in his postgame presser. "That's been encouraging him to drive more and not settle as much. With some of their guys out, we felt we could attack some mismatches and get to the basket without a ton of rim protection and he did that very well."

Marcus Smart scored 17 points, while Enes Freedom grabbed 15 rebounds against his former to go along with nine points off the bench to help the Celtics go to 13-11 on the season.
CJ McCollum led the 11-13 Trail Blazers, who were without Damian Lillard (abdominal tendinopathy), with 24 points, six assists, while Dennis Smith Jr. netted 21 points and Jusuf Nurkic added 18 points in the loss.
Boston took a 64-58 advantage into halftime before their lead grew to 31 in the third quarter -- the largest of the game. Trailing 122-98 with 5:51 left to play, the Trail Blazers pulled their starters.
Former Oregon star and Portland native Payton Pritchard continued to pour it on for the Celtics, as he scored 16 points (19 total) in the final six minutes. The C's bench (Schröder) was issued a technical for taunting after celebrating Pritchard hitting his fourth straight 3 -- which was by the center court logo to put Boson up 145-115 with 1:09 remaining in the final frame.

"You want to see him do well," Udoka said of Pritchard. "The crowd was very supportive of a hometown hero but it got a little out of hand with our guys getting overzealous and getting a technical. I did apologize to Chauncey at the end for that. I didn't mean for it to get out of hand like that. You're happy for him, but there's a line not to cross there."

Udoka is also a Portland native, as he picked up the first win in his hometown as an NBA head coach, something he doesn't take for granted, especially after visiting his former Jefferson High School prior to the game.

"There's a first for everything, as I mentioned. But this one obviously means more coming home," Udoka said. "A ton of family and friends here and the first time in this capacity, so obviously it means a lot. For me, it's great to come back and see family and friends briefly, but it’s also time to handle business."

The Celtics, who were without Jaylen Brown (hamstring), Al Horford (back) and Romeo Langford (ankle), will look to take some momentum into Los Angeles when they face the Lakers and Clippers on back-to-back nights beginning Tuesday night.