Jaylen Brown set to return against Bucks, says he came back 'little too early' 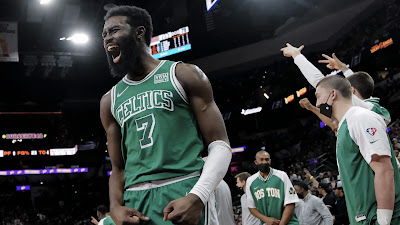 Jaylen Brown is ready to return from the hamstring injury that kept him sidelined through the Celtics' horrendous 1-4 west coast swing, according to coach Ime Udoka.
After missing eight straight games previously with a right hamstring strain, Brown was made available and played the next five before being shut down again with the hope that he'd make an appearance at some point during the road trip, but was kept out for precautionary reasons.

#NEBHInjuryReport update: Jaylen Brown should be available to play tomorrow, according to Coach Udoka. “You can see the burst is back … And he feels good after the workouts.”


Brown spoke to the media following the team's Sunday workout about his initial return and why he didn't feel comfortable or didn't have the same explosiveness prior to his hamstring injury.

"I think I came back maybe a little too early before, because I was not myself," Brown said. "And hamstrings are a little bit tricky, so we were just taking time to figure it out. The organization and the medical staff had good communication and we figured it out."

According to Brown, the team worked more on his athletic mechanics the second time around.

"Sometimes I'm so explosive some of my muscles tend to do the work for other muscles," he said. "So making sure that everything is fine, everything is working. At the same time, I think my body will naturally compensate and nobody will be able to tell the difference, because I can make up for it athletically."

The All-star wing also credits his recovery, which was a much more slower approach, to taking full advantage of rest and days off.

"I think just over the course of time, the body just naturally healed itself at the pace it wanted to go at," Brown said. "I wish it was a little bit faster, or a lot a bit faster, but it wasn't. But moving forward in the right direction now. I’m grateful that my body is agreeing with me."

Brown was the Celtics leading scorer at 25.6 points per contest, prior to the first stint on the injury list, but only averaged 14.6 points in the five games he played upon returning, despite the team's 3-2 record in the span -- they failed to reach 90 points twice.

"It's 25 points [per game] you have to make up for basically, minus the continuity and what he brings to the team defensively, and him being out there, how much it affects everybody else," Ime Udoka said Sunday afternoon. "You're relying on him to do so much just like we do with Jayson and some of our other guys.
"So we understand what he is there as far as that, and he's obviously a ton to miss, but some of those games without him were still very winnable games."

Though Brown is uncertain if he'll be on a minutes restriction against the Milwaukee Bucks tonight, the veteran wing is anxious to get back on the court with his teammates.

"I feel like I'm ready to go, obviously," he said. "We'll see when we get out there. I expect it to be a high-intensity game against Milwaukee. So I'm thinking there'll probably be some type of restriction. But to be honest, I'm ready to play. I feel great. So we'll see. I guess they'll let me know tomorrow."