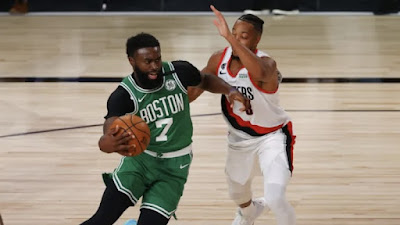 The Celtics started their five-game road trip on a sour note Friday night following a 137-130 loss to the Utah Jazz.
Boston was without Jaylen Brown, who was sidelined due to the same hamstring injury he sustained a month ago. According to the team, the All-Star wing will miss his second straight game when the Celtics face the Portland Trail Blazers Saturday.


Just 12 days after returning from an eight-game absence with a right hamstring strain, Brown will remain on the inactive list for now and it's unknown if he'll be available when the Celtics head to Los Angeles for a back-to-back against the Lakers and Clippers beginning Tuesday night.
Per Celtics coach Ime Udoka, Brown was listed "day-to-day" Friday following being ruled out against the Jazz. Over the last five games his minutes restriction had gone from 27 to 32, while he's averaging 14.6 points on 39.4% shooting, 3.8 rebounds, and 1.8 assists. However, it seemed like Brown's mobility on the floor has been a bit limited and he hasn't had his famous athletic burst during that stretch.

"We've increased his minutes and he's felt good at times, better, and then he had a setback so we're being cautious there," Udoka said Friday afternoon. "He'll get some rest and we'll reevaluate him tomorrow."

Still, it remains unclear if Brown re-aggravated the injury in Wednesday's win over the Philadelphia 76ers, where he played 33 minutes to finish with nine points on 3-of-11 from the field and was seen grimacing during different moments of the game.

"He didn't say anything," said Udoka in his postgame presser. "I thought he had a really good effort possession at the end there, denying Embiid the ball and scrambling around late. There's nothing he said or nothing we saw."

With the Celtics getting two days off before facing the Lakers, it appears more than likely Brown will continue to rehab the hamstring before any more updates become available.
In the meantime, Al Horford is out against the Trail Blazers with lower back stiffness and Romeo Langford is questionable after spraining his right ankle in the second quarter of the Celtics' loss to the Jazz and didn't return.
Joel Pavón
Follow @Joe1_CSP