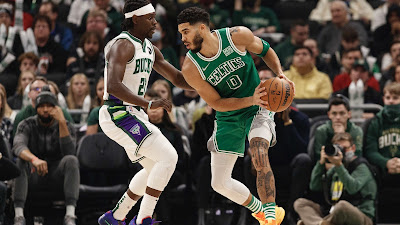 The NBA's Health and Safety Protocols has affected the Celtics once again, as Jayson Tatum is the eighth C's player to enter the league's COVID protocols.
The All-Star forward, who finished with 25 points in the team's Christmas Day loss to the Milwaukee Bucks, is set to miss his first game of the season when the Celtics face the Minnesota Timberwolves on the road tonight.


Tatum joins Dennis Schröder, Enes Kanter Freedom, Bruno Fernando, Justin Jackson, C.J. Miles, Aaron Nesmith, and Josh Richardson -- that could all potentially miss rematches against the Los Angeles Clippers and Phoenix Suns at home this week.
Marcus Smart is also listed as out with a right hand laceration sustained against the Bucks, according to Celtics coach Ime Udoka.
Boston will have 12 available players against the T-Wolves, including Al Horford and Grant Williams -- both of whom have been cleared out of the league's protocols and won't be on any type of minutes restriction.
Joel Pavón
Follow @Joe1_CSP