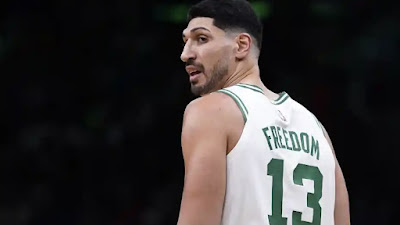 
It was less than 24 hours after news broke that Philadelphia 76ers' guard Danny Green had also entered protocols. The Celtics faced the the Sixers Monday night in a 108-103 loss, where Kanter recorded a double-double of 15 points and 11 rebounds in 40 minutes of action.
Freedom played only 12 minutes in Wednesday night's 111-101 win over the Cleveland Cavaliers, which included a loud "raise the roof" dunk.
The Celtics currently as it stands head to Milwaukee on Christmas Day to face the Bucks with only two active centers in Robert Williams III and Bruno Fernandez. Tip-off is a 2:30 PM ET on ABC.
**Update 5:35 PM**
Other than Freedom, the Celtics also announced that Aaron Nesmith, Bruno Fernando, C.J. Miles, and Justin Jackson have all entered health and safety protocols since Wednesday. The team issued a five-tweet injury report Friday afternoon that also included Marcus Smart (left hip contusion) and Romeo Langford (left Achilles) listed as questionable.
Additionally, those who were already in health and safety protocols such as Al Horford, Jabari Parker, Juancho Hernangomez and Brodic Thomas were on the latest report as questionable.
Celtics players who are available ahead of their Christmas Day matchup against the Bucks, for now include: Jaylen Brown, Joe Johnson, Payton Pritchard, Dennis Schröder, Jayson Tatum and Robert Williams III.

Celtics not listed on the injury report:

If they are signed before tomorrow's game, we can presumably add Al-Farouq Aminu and Norvel Pelle to this list. https://t.co/L61p7yom9L

Milwaukee, on the other hand has a short injury report, while Giannis Antetokounmpo (health and safety protocol) was cleared earlier today, it's still unknown if he'll play against the Celtics. Meanwhile, Donte DiVincenzo is questionable due to COVID protocols and Brook Lopez is out recovering from back surgery.
If the Celtics get back a few of their listed questionable players in protocol (Horford, Parker), plus Smart and Langford, they may give the Bucks some competition. Otherwise, its just a waiting game for the next 12-18 hours that could make things worse for Boston or swing in the other direction.
Joel Pavón
Follow @Joe1_CSP