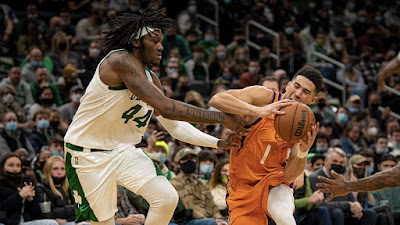 The Celtics wrapped up 2021 with a much needed 123-108 win over the Phoenix Suns in a matinee tip-off Friday afternoon at TD Garden.
Seven players scored in double-figures for Boston, led by Jaylen Brown and Marcus Smart, who each finished with 24 points respectively on a combined 18-of-38 shooting from the field.
Brown also grabbed 11 rebounds and Smart dished out eight assists in his return from a hand injury that forced him to sit out the last two games, including a disappointing 92-82 home loss to the Los Angeles Clippers Wednesday night.
Josh Richardson had 19 points off the bench, while Robert Williams recorded his first career triple double with 10 points, 11 rebounds and 10 assists to help improve the Celtics to 17-19 and even the season series against the Clippers at one-game apiece.
Jayson Tatum missed his third straight game due to still being in the NBA's Heath and Safety Protocols, but it didn't effect the C's offense, as they shot 54.2% from the floor for the game and led by as many as 30 at one point.

"We played some great basketball down the stretch," Brown said in his postgame presser. "We played with a nice flow and a nice identity. It made the game so much easier."

The Suns were without Deandre Ayton, Jae Crowder and coach Monty Williams, who have been out for the last three games due to being in league COVID protocols.
Devin Booker led Phoenix with 22 points on 7-of-26 from the floor and 1-of-5 from 3. Cameron Johnson added 20 points and Jalen Smith scored 19. Chris Paul struggled from the field (6-of-15) to record 14 points and eight assists in the team's third loss over the last four to be 27-8 on the season.
The Celtics started out aggressive in the first quarter, using an 18-6 run to close out the period and shot 58% overall in the half to take a 67-41 advantage into the break.
While the Suns got within 12 in the fourth quarter, Boston never gave up a lead and a lot had to do with the two-way New Year's Eve performance of Robert Williams, who went a perfect 5-of-5 from the field to go along with five blocks.

"When he comes out and plays basketball, there's not a lot of people that can contain him on both ends. His effect on defense and offense tonight, everybody seen it," Brown said of Williams following the win. "Rob had a great night tonight and deserves all the praise he gets."

A moment of silence was held before the game in memory of Sam Jones, a Celtics legend and Hall of Famer who passed away Thursday at the age of 88. Jones won 10 NBA titles in his 12 seasons all with Boston, as he's only second to teammate Bill Russell for the most championships won in league history. The franchise retired his No. 24 in 1969 when he was still an active player.
The Celtics will host the Orlando Magic in the first game of 2022 on Sunday night. Tip-off from the Garden is at 6:00 PM ET.
Joel Pavón
Follow @Joe1_CSP