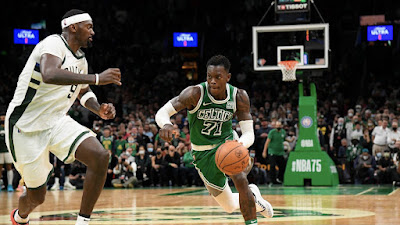 The Celtics announced that Dennis Schröder has entered NBA's Health and Safety Protocols and will not play against the Milwaukee Bucks, according to The Athletic's Shams Charania.
The veteran guard was one of the six players not on the team's injury report Friday and now becomes the ninth Celtic in league COVID protocols.


Schroder joins Enes Kanter Freedom, Bruno Fernando, Sam Hauser, Justin Jackson, C.J. Miles, Aaron Nesmith, Grant Williams, and Josh Richardson, who will be out for the next several days.
Meanwhile, the Celtics players who were listed as questionable less than 24-hours ago have been upgraded to available to play Christmas Day. Marcus Smart (left hip) and Romeo Langford (left Achilles) are set to start today, while Juancho Hernangomez, Jabari Parker, and Brodric Thomas are no longer in health and safety protocol. However, Al Horford is still out due to "return to competition reconditioning," but did travel with the team.