What's the future of Dennis Schröder as a Celtic? 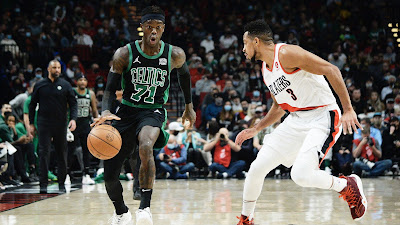 As the NBA season hits its quarter completion marker for most teams, the league's landscape of contenders and pretenders is starting to take shape.
The good news as a Celtics fan? Only six teams in all of basketball have an over .600 win percentage, with zero teams in the Eastern Conference having a win percentage over .700. What does this mean? Simple, nothing is decided, and the East is still as tight as a can of sardines.
Boston, who is currently in the play-in spots at 13-11, is a short win streak away from being a home seeded playoff contender. The bad news? Brad Stevens job is about to get a bit harder as the trade deadline starts to creep up. The biggest conversation point? The long-term future of Dennis Schröder as a Celtic.
Stevens shrewd move to sign the veteran point guard off the scrap heap has looked to be the opposite of the Jeff Teague experiment of 2020-21. Schröder has provided a steady bench scoring presence along with a clear understanding of his role. While he has had some eye wateringly poor shooting nights, overall, the former Laker has been what Celtics fans have been asking for the last three years - a true game changing scoring sixth man.
Again, with the good comes the bad. Schröder's great play has caused Stevens a growing dilemma in the coming months. What does he do with one of his best players who is almost assuredly unsignable at the end of the year?
While Stevens and his staff have likely already started this discussion internally, Boston might be in a position where a number of dominos could fall in either the extended stay for No. 71 or an early departure. Here are some of the scenarios we could see play out in the coming months:

The seemingly most likely option is that as the trade deadline approaches, true contenders will emerge and Schröder's talents will be lusted for across the league. When this happens, his team friendly $5.8 million contract becomes the biggest bargain in basketball. The problem is, what is it worth on the market? Many teams will likely be in to make a deal but the return will be the big question. What can be assured is that those teams will not be looking to send over major pieces to make the deal happen if they believe they are contenders. Meaning, a deal for Schröder is almost guaranteed to be for a draft pick. But, would you take a first-rounder in return for a veteran guard like Schröder?

Celtics keep Schröder and let him walk at the end of the year for…?

The other easiest answer is the Celtics keep him and see what they can do in the Eastern Conference playoffs. While that would almost guarantee they lose the player, they could make a serious run in a conference that they (even as poor as they have been) are a handful of games out of the first seed.
This approach would be dependent on one thing, are the Celtics good enough to pass on a return for trading him? The easy formula to most level headed green team fans, show me a team that can finish in a place above the play in game, and we can excuse losing a great asset for potentially nothing.

While it is unlikely, its possible Boston and Stevens choose to trim down the roster in other ways this trade deadline (or this offseason) and they find Schröder is a puzzle piece they want to keep. This option is complex and would require removing another $20-plus million salary from the 2022-23 roster (cough, cough Al Horford) but it isn't totally out of the question. The primary difficulty for the Celtics is that they would need to use "real" cap to sign him. This is tough, as they are currently projected to be $13 million over the cap and would need to likely offer a deal in the $12-$15 million a year range to keep Schröder interested in wearing green.
All told, expect a trade to be the outcome if these Celtics can't find a rhythm in the coming six weeks. As they say, "A bird in the hand is better than two in the bush, but a Bird from three is better than no extra first rounder."
Until next time!