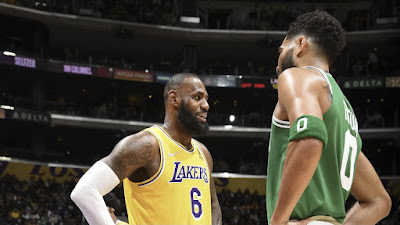 The Celtics seemed like they had their offense figured out in the first two of a five-game west coast swing, combining for 275 points to average 137.5 per contest.
On Tuesday, the Celtics just barely reached triple-digits in points on a poor shooting night of 43.9% from the floor and 30.3% from deep to lose 117-102 to their rival Los Angeles Lakers. Boston also gave up 66 points in the paint, allowing the Lakers to hit 51.6% of their overall shot attempts.

"I think this is the second time all season that we didn't necessarily play harder than the other team," Jayson Tatum said during his postgame presser. "It was kind of an ugly game on our part on both ends. We just didn't have that same pop. I think that's the tough part about it."

"It's completely on us. Me, my teammates. Like I said, just messing up simple coverages," Robert Williams explained in his postgame comments.

The Celtics big man had a few highlight alley-oop dunks, but spoke about how his team couldn't get back in the game once it slowly got out of hand.

"I felt like our energy was great, especially starting off the game, said Williams. "We just weren't ready for the punch in the second half, so gotta clean that up. "We tend to lay back and get comfortable when the game is going our way. It's something that we've been trying to break that habit all year. Gotta keep working on it."

Despite Tatum scoring 34 points, including 14 in the first four minutes of the game, the Celtics tried to crowd the Lakers three-headed monster of LeBron James, Anthony Davis and Russell Westbrook on defense, but the trio combined for 71 points, 23 rebounds and 19 assists.

"We wanted to invite them to shoot jump shots and keep them out of the paint. Obviously, that didn't work," head coach Ime Udoka said after the loss. "The effort and lack of toughness showed a bit tonight."

The Celtics at 13-12 will look to even their road trip record Wednesday when they face the Clippers on a second night of a back-to-back.
Joel Pavón
Follow @Joe1_CSP