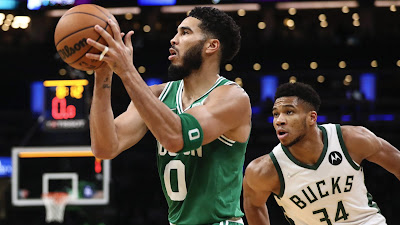 The Celtics beat the Milwaukee Bucks 117-103 Monday night at TD Garden to snap a three-game skid.
Jayson Tatum scored 16 of his 42 points in the fourth quarter, to finish with 16-of-25 shooting -- including going 7-of-13 from 3-point territory -- for a new season high in both points and 3s.
Jaylen Brown made his return after missing the last five straight games with right hamstring tightness to record 19 points and five assists. Grant Williams went 5-of-7 from deep for 17 points off the bench, while Al Horford and Robert Williams each netted 10 points apiece.
The Celtics, 14-14, are back at .500 after coming off a 1-4 west coast trip, to which coach Ime Udoka showed the team film of their opponents going down the lane with ease.

"We've been talking about who we want to be and just showed them," he after the win.
"I had an animated film session of that trip," Udoka added. "We didn't like that feeling and got back to who we are."

Giannis Antetokounmpo had a quiet 20 points and eight rebounds, while Jrue Holiday also registered 20 points, eight assists. Massachusetts native Pat Connaughton added 15 points, nine rebounds and Bobby Portis chipped in 13 points, eight rebounds for the Bucks, who are now 18-11 on the season.
Boston started off slowly, trailing by 12 in the first half before turning a one-point halftime lead into a 64-56 advantage, as they used a 13-6 run to start the third quarter.

"It wasn't time to sugarcoat anything," Tatum said of the film meeting during his postgame presser. "He showed us. It was open."

The Celtics took a 85-74 lead into the final frame, as the Bucks made one final rally attempt when they cut the deficit to 95-86 midway through the fourth. Tatum scored five answered points, to put Boston up 100-86.
The All-Star forward put it way for the Celtics by hitting back-to-back 3s to push the lead to 18 -- the largest of the night, with just over two minutes left to play.

"On that west coast trip we were out of our identity," Grant Williams said in his postgame comments. "Tonight it was part of us getting back to our identity as the best defensive team in the league."

The reigning NBA champs were held to 44.4% shooting from the field and 30.6% from behind the arc, while committing 14 turnovers, that were converted into 24 points.
Boston also had one of their better passing games of the year, as they had 31 assists on 43 made baskets, that resulted in 50% overall shooting, which included 20-of-47 (42.6%) from long range.
The Celtics will have a few days off before they host the Golden State Warriors Friday and then the New York Knicks on a second night of a back-to-back.

Marcus Smart, who only scored two points, finished with a game-high 11 assists to go along with five rebounds and zero turnovers. The veteran guard has plus/minus rating of +10 when he was on the floor.
Josh Richardson missed his second consecutive game, as he remains in the league's Health and Safety protocol.
Joel Pavón
Follow @Joe1_CSP