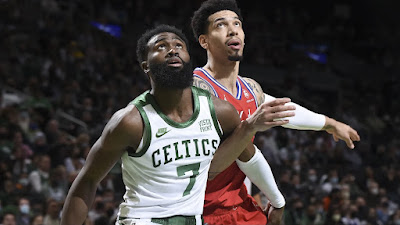 The shorthanded Celtics couldn't contain Joel Embiid down the stretch, as they fell to the Philadelphia 76ers Monday night 108-103 at TD Garden.
Despite Philly also being undermanned, the All-Star big man scored a game-high 41 points on 14-of-27 shooting to go along with 10 rebounds, five assists, four blocks and two steals in 40 minutes.
Seth Curry had 26 points, seven assists while Tobias Harris added 25 points and seven rebounds for the 16-15 Sixers.
Philadelphia had three players in NBA Health and Safety Protocols, while the Celtics had seven -- forcing Boston to sign forward Justin Jackson and veteran wing C.J. Miles via the league's hardship exception over the past few days.
Jaylen Brown had 30 points and Jayson Tatum struggled on 5-of-14 from the field to score 17 points, but also had nine rebounds, six assists, two blocks and two steals. Enes Freedom in his first start of year notched 15 points, 11 rebounds and Marcus Smart also recorded 15 points. Payton Pritchard chipped in 14 points off the bench for the Celtics, who dipped below .500 again at 15-16.
The 76ers never trailed in the first half, taking a 51-49 advantage into the break, before Boston took its first lead of the night a minute in a half into the third quarter.
After a back and forth rest of the period -- which included five ties and seven lead changes -- the Celtics were up 80-75 heading into the final frame.
Brown's 3 with 4:14 left to play gave Boston a 97-90 lead, their largest of the night, but Matisse Thybulle immediately hit a 27-footer and Embiid followed it with a pair of made free throws to get the Sixers within two.
Danny Green nailed a go-head 3 to put Philly up for good (99-98) with 1:43 remaining and the Embiid show took over the rest of the way, as the veteran center connected on three straight jumpers in the final 1:22 -- including a 16-foot step back -- and three free throws in the last four seconds to secure the win and even up the season series at one-game apiece.
Embiid (scored 17 fourth quarter points), along with Curry and Harris combined for 92 of the Sixers' 108 total scoring output, the most by any trio of teammates in a regular season game so far this year, according to ESPNStatsInfo.
Though the Celtics' second unit outscored the 76ers' bench 18-1, Philadelphia shot at an overall 50% clip from the floor and 40% from deep, while Boston hit 38-of-82 (46.3%) from the field and 7-of-27 (25.9%) from behind the 3-point arc.

"I didn't feel like scoring was a problem," said C's coach Ime Udoka of the offense late in the game. "I'd say we scored enough to win, even with the turnovers."

Boston is now 2-2 over their last four outings, as they'll look to wrap up a five-game homestand on a positive note when they host the Cleveland Cavaliers (19-12) Wednesday night.

Boston assisted only 16 times on 38 made baskets and the 76ers had 20 assists on 36 made shots. The Celtics finished with 18 turnovers to Philly's 17 and the C's outrebounded the Sixers 42-34, while also outscoring them in the paint 46-22.
Joel Pavón
Follow @Joe1_CSP