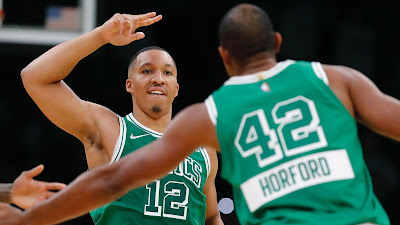 The Celtics will be without Al Horford and Grant Williams against the Golden State Warriors, as both big men have entered the NBA's Health and Safety Protocols early Friday afternoon.
Just hours later, the team announced that forward Juancho Hernangomez and rookie Sam Hauser had also entered the league's COVID-19 protocols, bringing the total number to five that have been ruled out -- joining veteran Jabari Parker, who was placed on the league's list Thursday evening.

Dennis Schröder is also out, but with a non-COVID related illness, as the Celtics canceled Friday's pregame shootaround and media availability.
This will be the second time for Horford this season being placed in the league's heath and safety protocols. He tested positive for COVID-19 back during the preseason, forcing him to miss the Celtics' season-opener against the New York Knicks. It remains unclear if Horford is vaccinated or not.
Meanwhile, Williams, who's reportedly been vaccinated as of September, provided an update via Twitter shortly after the news went viral, thanking those who have reached out in support.

Feeling Good. To all that have reached out thanks for your love and support. Be back in no time !!

According to ESPN's Adrian Wojnarowski, the NBA is dealing with a COVID outbreak among several teams since the start of December. 22 players entered health and safety protocols on Wednesday and Thursday alone.
Guard Josh Richardson re-joined the team 48-hours ago after being placed into health and safety protocols back on Dec. 10.
The shorthanded Celtics (11 available players) host the the Warriors at TD Garden tonight after being off since Monday, in a nationally televised broadcast. ESPN will have the tip-off at 7:30 PM ET.
Joel Pavón
Follow @Joe1_CSP