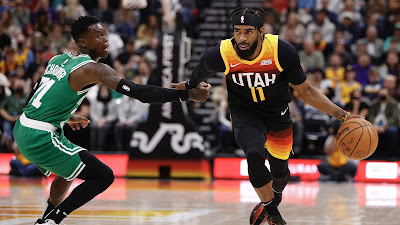 The Celtics' double-digit comeback fell short, as the Utah Jazz's hot 3-point shooting was too much to overcome in a 137-130 loss Friday night at Vivint Arena.
Jayson Tatum's game-high 37 points on 12-of-25 shooting was not enough while, Dennis Schröder, who started in place of Jaylen Brown (hamstring) -- added 26 points on 10-of-21 from the field. Al Horford finished with 21 points and nine assists for the Celtics, but the Jazz hit 52.9% from deep, despite Boston netting 51.6% of their overall shot attempts.

"I've never been a part of a team hitting that many 3s like that," Horford said in his postgame comments. "And especially the type of 3s -- they weren't necessarily all open. They were tough, contested 3s."

Utah nailed 27 3-pointers, as Donovan Mitchell finished with 34 points (6-of-14 from 3), six assists and Mike Conley had 29 points and was a perfect 7-of-7 from behind the arc to go along with seven dimes. Rudy Gobert added 18 points and 12 rebounds for the Jazz -- who are 15-7 on the season.
The Celtics were down 38-25 after the first quarter and Utah was already at 9-of-13 from 3-point territory, before the deficit was 43-29, the largest of the night. Boston went on a 11-0 run to cut the Jazz's lead 43-40.
Horford's five second quarter baskets kept the C's from falling behind to double-figures again and by halftime Utah was only up 57-56.
A go-ahead layup from Marcus Smart (15 points) put Boston up 73-71 for their first lead of the game with 7:30 remaining in the third period.
Robert Williams capped a 9-0 run with six unanswered points, to give the Celtics a 113-109 advantage midway through the final frame. But, the Jazz responded by scoring on seven straight possessions, including a Conley 3-pointer to put the home team up 127-120 with 1:57 left to play.
Tatum's layup and a pair of free throws got Boston within three, until Mitchell made another dagger 3 with 28.2 seconds remaining on the game clock to put Utah up 133-127 and end the C's final rally.
The Jazz hit nine of their last 11 shots to snap Boston's mini two-game win streak and have them at 12-11 on the year.

"To only lose by seven with a team shooting that hot, it shows our effort and the way we played hard tonight," said C's coach Ime Udoka.

The Celtics get off to rough start on their five-game west road trip, as they'll head to Portland on a second night of a back-to-back to face the shorthanded Trail Blazers (11-12) Saturday.

The Celtics outscored Utah 50-36 in the paint and forced 20 turnovers compared to the only six they committed. Boston was outrebounded 44-30 and the Jazz won the battle of the points off the bench 28-23.
Joel Pavón
Follow @Joe1_CSP