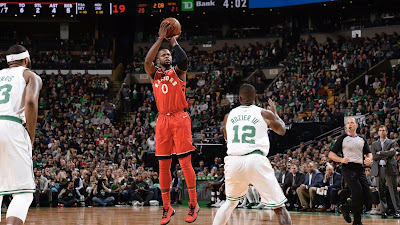 The Celtics have signed C.J. Miles to a 10-day contract via the NBA's hardship exception, according to ESPN's Adrian Wojnarowski.
Boston currently has seven players out due to being in the league's health and safety protocol, while there were three more listed as questionable, are available ahead of Monday's matchup against the Philadelphia 76ers.

The Boston Celtics are signing G/F C.J. Miles to a hardship exemption, sources tell ESPN. Miles, a 15-year veteran, played for the Wizards in the 2019-2020 season.


Miles, who's a 15-year NBA veteran, last played for the Washington Wizards during the 2019-20 campaign before sitting out last season. The 6-foot-6 wing was drafted by the Utah Jazz back in 2005 as the 34th overall pick, and has career averages of 9.6 points per game while shooting 35.8% from behind the arc.
The lefthander has been playing and working with the G-League Ignite this season, as part of the one-year development program of straight out of high school players.
With the addition of Miles the Celtics will have 12 available players against the Sixers:
Jaylen Brown
Bruno Fernando
Enes Freedom
Justin Jackson (recently signed via hardship)
Romeo Langford
C.J. Miles
Aaron Nesmith
Payton Pritchard
Dennis Schröder
Marcus Smart
Jayson Tatum
Robert Williams
The seven players in the health and safety protocols are:
Sam Hauser (Two-Way)
Juancho Hernangomez
Al Horford
Jabari Parker
Josh Richardson
Brodric Thomas (Two-Way)
Grant Williams
Per NBA insider Baxter Holmes, 113 players have entered league's health and safety protocols, including 97 this month alone and three of which have entered for a second time. New league rules state that if a team doesn't have at least 13 available players for games due to positive COVID tests, they must sign players via the hardship exception.
Joel Pavón
Follow @Joe1_CSP