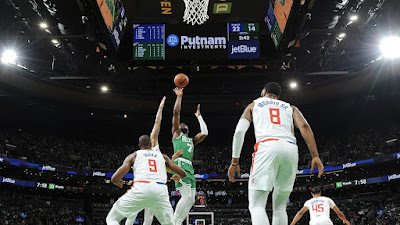 The Celtics had an historically poor shooting night from beyond the arc, as they fell to the visiting Los Angeles Clippers 91-82 at TD Garden Wednesday night.
Jaylen Brown led all scorers with 30 points, while Robert Williams had 16 points and 14 rebounds in the Celtics third straight loss and fifth in their last seven games.
Boston went 4-of-42 from 3-point territory, making it only the third time in NBA history a team has attempted 40 3s and made less than five. The C's as a franchise has never made fewer than four 3-pointers on at least 30 attempts.

"We got a lot of great looks and we didn't make them," said Brown during his postgame presser after shooting 1-of-13 from deep. "I'm still confident. Despite what the statistics say, if you have an open shot you've gotta shoot it. I tell Romeo [Langford], I tell Payton [Pritchard], I tell myself, 'If you're open, you've got a good look, you've gotta take it.' I had good looks tonight.

Al Horford, who asked for teammates to "look in the mirror" and take some accountability following Monday's loss to the Minnesota Timberwolves, recorded nine points, 10 rebounds, eight assists, two steals and three blocks for the now 16-19 Celtics.
Jayson Tatum missed his second start after being placed in the NBA's Health and Safety Protocols, and Marcus Smart also sat out for a second consecutive game with a hand laceration
Old friend Marcus Morris Sr. put up 23 points and 10 rebounds to lead the Clippers to a 18-17 record. Eric Bledsoe scored 10 of his 17 points in the fourth quarter, while Massachusetts native Terance Mann and Luke Kennard each registered 17 points respectively to help snap a two-game skid.
Los Angeles was without Paul George (torn ligaments in left elbow) for a third straight outing and of course Kawhi Leonard -- who hasn't played a game yet this season and is still recovering from a partial ACL tear.
The Celtics trailed 50-41 early in third quarter before using a 12-2 run to tie eventually tie the game 57-57 with 4:40 left in the period. The Clippers went on a 12-6 spurt of their own to take a 69-63 advantage into the final frame.
Boston opened the fourth with a 9-2 run to grab their first lead of the second half, but it was short lived, as the Clippers regained control and were up for good. The Celtics got within two (78-76) with 4:44 left to play, but Morris Sr. and Bledsoe scored the next eight unanswered points, including a dagger 3 by the veteran guard to put Los Angeles up 86-78 with 2:05 remaining.
Despite the C's cutting it down to four on an alley oop dunk from Payton Pritchard to Robert Williams, that would be the last time they'd score in the final minute -- as they missed their last five field goal attempts to give the Clippers the season series win 2-0.

"It's hard to say what we can do better because we got wide open looks, said coach Ime Udoka about his team's poor shooting performance. "The number of open looks we got was phenomenal overall."

The Celtics host the Phoenix Suns (27-7) in a Friday afternoon 1:00 PM ET matinée tip-off to close out the calendar year.

Los Angeles shot 40.7% from the field and 11-of-28 from 3, while the Celtics shot a horrible 34.7% from the floor. Boston assisted 19 times on 35 made baskets and only committed eight turnovers, but the Clippers dished out 17 dimes on 33 made shots and turned the ball over 16 times.
Joel Pavón
Follow @Joe1_CSP