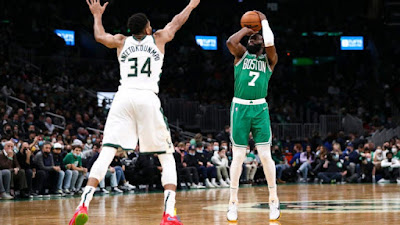 The Celtics got a much needed 117-103 victory over the Milwaukee Bucks Monday night in Jaylen Brown's anticipated return from tightness due to a hamstring strain.
The All-Star wing looked sharp and most importantly healthy after missing all of the team's horrendous  1-4 west road trip last week. The difference was night and day in terms of how Brown moved against the NBA champs versus the first time he made his way back from the injury where there was visible limping.

"I felt good out there tonight just moving around," said Brown to reporters. "I didn't care if I missed every shot -- I'm just grateful I felt good and grateful we got the win."

Prior to his 19-point, 5-assist performance, Brown said he returned a "little too early" from the injury the first time, which he sustained initially over a month ago. But after logging in 30 minutes as a starter for the Celtics Monday, Brown spoke about how his body felt this time around -- despite a scare early in the first quarter when he appeared to bang knees with Bobby Portis.

"I felt like myself, being able to move and cut and jump when I wanted to," Brown said. "I'm grateful that I'm able to do that, so I'm looking forward to the next game."

Celtics coach Ime Udoka called Brown's impact "invaluable" and that you can the difference when he's in the lineup versus being out, as the team snapped a three-game skid.

"You can see the crowd when he's on the floor and when he's not," Udoka said in his postgame presser. "It's pretty apparent there."

Tatum was obviously the biggest beneficiary of Brown's return, as he recorded a season high 42 points and was 7-of-10 from deep to lead all scorers.

The Celtics, who finished with 31 assists on 43 made baskets, will look to use some of that momentum off of Brown's return Friday when they host the Golden State Warriors on the first night of a back-to-back.
Joel Pavón
Follow @Joe1_CSP