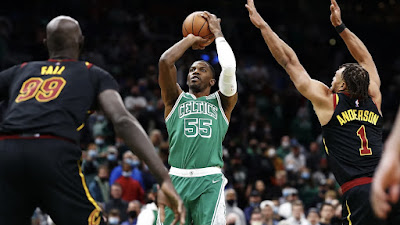 Veteran wing Joe Johnson has come full circle after signing a 10-day contract with the Celtics, the same franchise that drafted him over two decades ago.
Making his first appearance in an NBA game since 2018, Johnson hit his only shot attempt late in the Celtics' 111-101 win over the Cleveland Cavaliers -- just hours following officially joining the roster.
The TD Garden crowd started chanting "Iso Joe!" "Iso Joe!" "Iso Joe!" in the final minutes of the fourth quarter and Celtics coach Ime Udoka emptied his bench. Once Johnson checked in, the fans went nuts, before he knocked down an isolation mid-range jumper after getting the ball at the elbow -- a vintage shot -- which the former All-Star went 1,306 days since his last NBA bucket.

"He joked in the locker room, 'if I get them on that hip, it's done, they're dead.' So, we know what he is, everybody said it as they walked in, 'Joe is a bucket. 'That's what he is and he's always been, and so, that's not going to change. Happy for him," said Udoka in Wednesday night's postgame presser.

Already an emotional night for Johnson, the 40-year-old acknowledged the feeling he got when hearing chants of his name in the same building where his NBA journey began back in 2001.

"For me, yeah, it is kind of surreal. To have them chanting my name like that," said Johnson after the win. "To come in the game and be somewhat effective, that's fun. At my age, you try to relish every moment, enjoy the process, and live in the moment. That's kind of what I'm doing right now, just living in the moment. It's fun."

Jaylen Brown, who led all scorers with 30 points against the Cavs, noted that he's always been a fan of Johnson as the two have even played pick-up together as recent as this past summer.

"In Atlanta, I got to go to a lot of those games," said Brown in his postgame comments. "I remember when it went to seven games, the Hawks went to seven games with KG, Paul Pierce, I remember that was a big deal in the city. So definitely a childhood icon, and having him here in the locker room is great. We need some vet leadership, we need some guys that kind of get the energy, the tone, the pace, the maturity level to where it needs to be, so I'm all for it."

Over the past couple of years, Johnson has been playing and dominating in Ice Cube's BIG3 league, where he's won a championship and two MVPs.

"The BIG3 was everything for me. Shout out to Ice Cube for allowing me and giving me a chance to put my skills on display and go out and have fun every weekend," said Johnson. That was special… If it wasn't for that I probably wouldn't be here right now."

Johnson also made NBA history in his return to the Celtics, according to ESPN's Tim Bontemps.

Johnson "set a new record for time between games with the same team, as his 19 years, 308 days between appearances shatters the previous record of 14 years, 331 days, which was set by Los Angeles Lakers center James Edwards."

While it's only a 10-day contract via the NBA's hardship exception, Johnson doesn't take for granted the opportunity to come back and play in front of Celtics fans after all these years.

"It was exciting, it was fun to get that type of ovation from the crowd. Them chanting my name, that was pretty special to me. So I appreciate them for that."

With Brown clearly giving his approval and Jayson Tatum simply smiling at the fact that Johnson is a Celtic again, that alone may be worth it for a former seven-time All-Star to not only grace the locker room with an obvious veteran presence but also spread some positivity that may help turn things around for a team with a 16-16 record.
Joel Pavón
Follow @Joe1_CSP