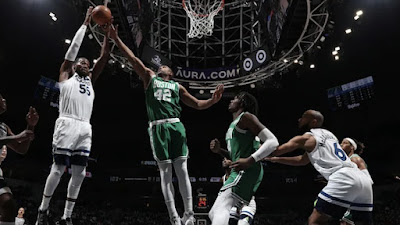 The Celtics once again found a way to cough up another double-digit lead in their 108-103 loss to the shorthanded Minnesota Timberwolves at Target Center Monday night.
Already playing without Jayson Tatum, who joined seven other teammates in the NBA's Health and Safety Protocols, plus Marcus Smart was also out with a hand laceration suffered in the Christmas Day loss to the Milwaukee Bucks -- the C's did have two of their frontcourt players return to the lineup, but it wasn't enough.
Jaylen Brown scored a team-high 26 points to go along with his 10 rebounds, while Payton Pritchard in his first start of the season, recorded 24 points, eight rebounds and six assists in 45 minutes of action.
Al Horford made his return from the league's health and safety protocols to finish with 16 points, nine rebounds and six assists. Grant Williams also made his way back from a five-game absence due to COVID protocols to add 15 points and six rebounds off the bench for the undermanned Celtics, who are 16-18 on the year.
The Timberwolves' top-three leading scorers; Karl Anthony Towns, Anthony Edwards and D'Angelo Russell were all in the league's health and safety protocols. Jaylen Nowell had a game-high 29 points on 10-of-18 shooting, including going 6-of-9 from behind the arc off the bench. Nathan Knight added 20 points, 11 rebounds and Jaden McDaniels chipped in 17 points for Minnesota, who improved to 16-17 on the season.
The Celtics ended the second quarter on a 13-0 run to take a 56-45 advantage into the half, before a 29-point third period for the T-Wolves had them only down five (79-74) to start the final frame.
Nowell's go-ahead one-handed dunk, followed by consecutive 3s by by Knight and Malik Beasley (15 points, eight rebounds), put Minnesota up 87-81 with 8:32 left to play.
Boston trailed by as many as 10 and never got any closer than within four the rest of the night on their way to a second straight defeat and fourth over the last six games.

"One of the poorest losses of the year," said C's coach Ime Udoka. "A team as depleted as we are just out-hustled us. Very undisciplined effort overall."

Former Celtic and Timberwolves latest free agent signee Greg Monroe, returned to an NBA roster for the first time since 2019. The veteran big man officially joined the team just hours prior, as he netted 11 points, grabbed nine rebounds and handed out six assists in 25 minutes off the bench.

"I woke up at about 4 a.m. First flight was canceled," Monroe said in his postgame presser. "I left DC about 7 a.m. roughly, had to connect in Chicago, got here around 11, had COVID testing, got a chance to rest, came to the gym around 4."

The Celtics return home on Wednesday to host the Los Clippers in a rematch from earlier in the month and then face the Phoenix Suns at TD Garden to close out the calendar year Friday afternoon.

Boston shot 37.1% from the field and 16-of-47 from deep, while the Timberwolves hit 44.4% from the floor and 14-of-34 from 3-point territory. Both teams grabbed 53 rebounds apiece, but the C's were outscored in the paint 50-26 and finished with 23 assists on 33 made baskets to Minnesota's 30 dimes on 40 made shots.
The Celtics are now 22-5 against the T-Wolves since Kevin Garnett got traded to Boston and were on a nine-game win streak before Monday night.
Joel Pavón
Follow @Joe1_CSP