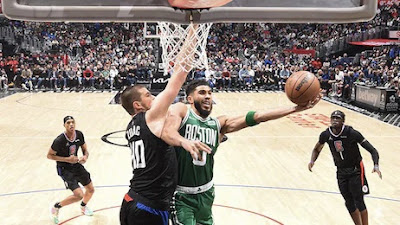 The Celtics once again attempted to rally from a double-digit deficit, but they came up short in a 114-111 loss to the Los Angeles Clippers at the Staples Center Wednesday.
Jayson Tatum finished with 29 points, 9 rebounds, while Dennis Schröder added 19 points, eight assists for the C's, who lost back-to-back nights in Los Angeles and are 13-13 on the season.
Josh Richardson had 17 points off the bench and Marcus Smart netted 16 points to go along with seven rebounds and six assists. Jaylen Brown missed his fourth straight game with tightness in his right hamstring
Rookie Brandon Boston Jr, who's previous career-best was 13 points, led Los Angeles with a new season-high 27 points off the bench on 9-of-13 from the field and 5-of-8 from deep, plus four steals. Former Celtic Marcus Morris Sr. scored 20 points and Reggie Jackson contributed with 17 points, seven assists. Luke Kennard had 15 for the Clippers, who were playing without Paul George (bruised right elbow) and now have a 14-12 record.
The Celtics trailed 63-51 at the break as Boston capped an 18-point half performance in 14 minutes with a buzzer beating 3 from the top of the key, before the Clippers used a 13-4 run to make it a 76-55 lead -- the largest of the night in the third.
The C's responded with a 20-4 spurt of their own to get within four, as Tatum scored 9 points during that span that included a dunk off an Eric Bledsoe turnover.

"We started picking up the pressure, getting some turnovers and speeding them up," Tatum said in his postgame presser. "We always feel like we have a chance till the buzzer goes off."

However, the Clippers took a 87-78 advantage into the final frame and pushed to it to 15 after eight straight unanswered points. But the Celtics went on another 10-0 run to get within 102-97.
The final three minutes saw back-to-back 3s by Jackson and Kennard for the Clippers to push their lead back up to 11. Schröder and Richardson hit back-to-back 3s of their own, as the C's deficit was down to five.
Following a successful challenge of an out-of-bounds call for the Celtics with 1:29 left to play, Tatum tipped in an offensive rebound off a Schröder missed layup to get the C's to 108-105.
Morris nailed a 3 on the opposite end, while Los Angeles also went 3-of-4 from the free throw line in the last 12 seconds, despite the Celtics getting within one, but Tatum missed a potential game tying long 3 at the final buzzer.

"We only played a quarter and a half," Celtics coach Ime Udoka said after the loss. "Gifting them points, that is the frustrating part. The turnovers (23) were enough of a gift. That's unacceptable. We've got to be tougher and take care of the ball."

Tatum and Robert Williams each had six turnovers apiece, as the Celtics fall to 1-3 on their five-game road trip. They'll look to wrap up the western swing on a strong note in Phoenix against the Suns (20-4) Friday night.