Why Marcus Smart says Celtics about to 'go on a run' 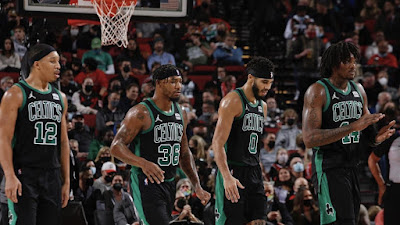 The Celtics are 1-1 to start their five-game west coast road trip, after beating the Portland Trail Blazers 145-117 in a blowout on a second night of a back-to-back.
At 13-11 overall with the sixth best record in the Eastern Conference, Boston finds currently itself only 3.5 games out of first place. Following an offensive explosion of scoring at least 130 points in consecutive outings against the Utah Jazz (137-130 loss) and Blazers -- the first time in team history since 1990 that the Celtics have achieved such a feat -- Marcus Smart believes his team is on the verge of making a run upwards in the standings.
While winning three of their last four, plus averaging 137.5 points per contest to start this western swing, the Celtics seem like they have a little extra motivation, as they'll face Lakers and Clippers in another back-to-back set, that begins Tuesday night.

"Of course," Smart replied Monday in his post-practice presser. "We're nowhere near where we want to be with the results; record-wise but to know the fact that we're only three games, this short, out of first place the way we've been playing; that's still encouraging because at any given moment we're going to go on a run, and then things are going to change for us. We just have to continue to play the game the right way like we been playing and just continue to trust one another."

Playing without Jaylen Brown (hamstring) and Al Horford (back) in their lineup at all Saturday night, the Celtics were still able to outscore Portland 81-59 in the second half and notch a season-high 145 points in regulation -- the most by an opponent in Trail Blazers history that didn't go into overtime.

"It's very satisfying," said Smart, who finished with 17 points and four assists. "We have to put points on the board. It will help you win games, especially with our defense; the way it is. The way it's coming along, to have our offense catch up with that is something that's a sigh of relief and it's a good feeling for us, for all of us. We're happy. We're not content with it. Obviously, we know we still have work to do but we're on the right track."

Six players finished in double-digit scoring for the Celtics, including Jayson Tatum and Dennis Schröder, who both netted 31 points apiece and even Portland native Payton Pritchard added 19 points (16 came in the final six minutes) off the bench.

"For us on the offensive end, it's just staying consistent," Smart said. "We have games where we do very well and we have other games where we come out sloppy in the first quarter or first half and then we try to catch ourselves up and we're trying to wake up. So, for us, it's just staying consistent all over from the tip of the ball to the last buzzer of the game. I think that's one area, for us, that we would like to improve and something we definitely need to improve on."

Smart understands in order for the Celtics' offense to get off to a good start, it begins with him as the starting point guard to dictate team's consistency on both ends of the floor.

"For me, especially, being a point guard, it's turnovers," Smart explained. "These last couple of games my turnovers have been a little high for what I would expect for this team. So, really, those two things -- staying consistent from the start and limiting our turnovers."

The Celtics tip-off against the Lakers tonight at 10:30 PM ET on TNT.
Joel Pavón
Follow @Joe1_CSP