Warriors 111, Celtics 107: Stephen Curry too much for C's to overcome despite 20-point comeback 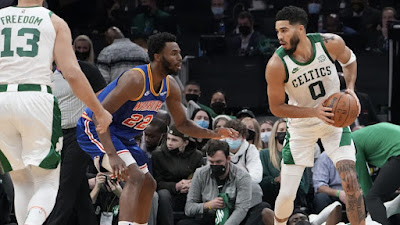 The Celtics fell to the Golden State Warriors 111-107 at TD Garden, despite coming back from being down by 20 points Friday night.
Jayson Tatum once again had a team-high 27 points on 9-of-19 shooting, to go long with eight rebounds and six assists, while Jaylen Brown in his second game back from his hamstring injury, added 20 points and nine rebounds.
Marcus Smart had 19 points, eight assist and Josh Richardson returned to the lineup after missing the last two outings, to chip in 15 points off the bench for the Celtics -- who are now 14-15 on the season.
Boston only had 11 available players, as Al Horford, Grant Williams, Jabari Parker, Juancho Hernangomez and Sam Hauser were ruled out due to being placed into the NBA's Health and Safety Protocols all within the last 24 hours prior to tip-off. Dennis Schröder also did not play, but was sidelined with a non-COVID related illness.

It's hit us, just like it's hit the rest of the league" said Ime Udoka after the loss. "It seems inevitable at times for everybody."

Stephen Curry continued his celebration after becoming the league's all-time 3-point king earlier this week, scoring 30 points and hitting 5-of-14 from deep. Andrew Wiggins had 27 points, while going 5-of-7 from behind the arc to lead Golden State to a 24-5 record and snap a five-game skid against the Celtics.
In his first game since breaking Ray Allen's record of 2,973 made 3-pointers, Curry berried two straight 3's to start the game, as Golden State grabbed a 14-3 lead four minutes in.
Boston's deficit ballooned to 20 in the second quarter -- the largest of the night -- before back-to-back 3s from Richardson and Tatum, plus an 18-footer from Brown made it 64-54 just before halftime.
On the Warriors' last possession of the second period with 0.9 seconds left, Curry heaved a 50-footer but Smart fouled the veteran guard as he landed -- giving him three free throws with 0.1 left on the clock. Udoka, upset with the call, received a technical, which gave Curry a fourth freebee from the charity stripe.
The former league MVP sank all four free-throws, his only points of the quarter to stop any sort of momentum for Boston and give the Warriors a 68-54 advantage at halftime.

"The second quarter where we gave them four points, that was kind of a gut punch," Tatum said in his postgame comments.

The Celtics used a 17-5 run to start the third and get within two with 6:22 left in the quarter and still trailed 82-81 heading into the final frame.
Tatum's 25-foot step back 3 put Boston ahead to start the fourth for the first time since the opening quarter, but it was short-lived as Andre Iguodala (12 points, six assists) tied it up on the opposite end and Damion Lee nailed a go-ahead 3 to put the Warriors up for good with 10:12 left to play.
Boston kept it close the rest of the way, as they were down 97-95 with 5:56 remaining, before the Warriors went on a 8-0 run, which was capped off with Curry swishing his last 3 of the game to push the lead to double-digits again.
Brown's layup gave the Celtics a 8-2 spurt in one last rally attempt to still trail Golden State 107-104, but Curry's driving floater stopped the bleeding with 35 seconds left.
Smart made a much needed 3 on an offensive rebound after drawing a charge on Curry -- who fouled out -- to get the Celtics within two in the final 4.2 seconds before Lee hit a pair of free throws to ice the win.

"We gave them second, third and fourth chances," Smart said in his postgame presser about not capitalizing on big moments. "The basketball gods rewarded them for that."

Despite both teams shooting roughly 43% from the field and between 34-36% from 3, Boston missed nine free throws (20-of-29) that came back to haunt them late in the fourth and turned the ball over 16 times that led to 16 fast break points for the Warriors, who also recorded nine steals and blocks.
The Celtics have a quick turnaround on their current homestand, as they'll host the New York Knicks (13-16) Saturday on a second night of a back-to-back. NBATV has the tip-off at 7:00 PM ET.

Boston outscored the Warriors 38-34 in the paint and broke even on the battle of the boards 45-45, but only finished with 20 assists on 36 made baskets, while Golden State had 27 dimes on 39 made shots.
Joel Pavón
Follow @Joe1_CSP