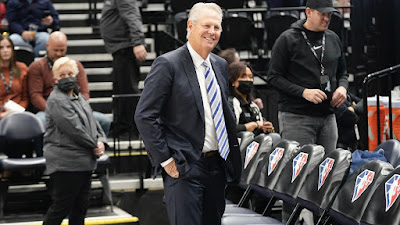 Former Celtics guard and team president of basketball operations Danny Ainge has been hired by the Utah Jazz as CEO and alternate governor, according to ESPN's Adrian Wojnarowski.
It was just over a week ago that Ainge was in Boston for an event to honor Kevin McHale and he spoke about his retirement for the first time since stepping down from the Celtics' front office back in June.

"I'm not closing the book on other opportunities but they'd have to be the right situation," Ainge said in an interview back on Dec. 8th. "I'd have to be working with the right people, in the right role. I don't want to get back into 18-hour days. I don't think that's in anybody's best interest, for that matter.
"I know how much work it takes to be good at the job. And, at the same time, I have 40 years of experience in the NBA. And I think I have a lot to offer some team that might see me as a helper to people in the organization. But, yeah, just depending on what the role is."

Ainge, who currently lives in Utah after an 18-year run that included a lone championship in 2008 as the one who essentially ran the Celtics, considered staying away permanently before making a decision to return to the NBA with a new team and position.

"I didn't have an idea, but there was a possibility I would step away forever.," Ainge said in his introductory presser with the Jazz Wednesday. "My wife and I had discussed it a few times, and I had looked at other opportunities outside of basketball."

Though he loved his time with the Celtics, Ainge added that he needed a "break" from Boston after nearly two decades at the helm.

"Heck, I was working with my son," Ainge said. "That was a blast, and a once-in-a-lifetime opportunity maybe. I really appreciated that. And ownership was great, and my staff was great. That had nothing to do with it.
"As a lot of people through the pandemic, the NBA has seemed like it has gone two years in one year and it has been a heavy load, and I just felt like I needed to get away."

Still, Ainge says he got the itch to possibly return about two weeks ago, when Jazz majority owner Ryan Smith, who is a longtime friend and also a former BYU alum, convinced him to join the franchise while playing golf in the Bahamas.

"If you have D.A. sitting 20 minutes away in Utah, you put him to work, right?" Smith said Wednesday to reporters. "Everyone has always asked, 'Is this the plan?' Well, it definitely wasn't Danny's plan until last week."

"We have great people with Quin and Justin and obviously the ownership group also," Ainge said. "Ultimately, everything will always come down to Ryan as the owner to make tough decisions, but I think I can just help by adding information to the process of making those tough decisions as an organization."