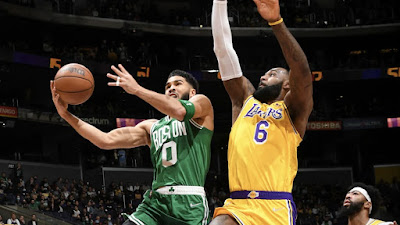 The Celtics fell to the Los Angeles Lakers 117-102 Tuesday night at Staples Center to split the season series for the fifth straight year.
Jayson Tatum led all scorers with 34 points on 13-of-22 shooting and 5-of-7 from deep, to go along with eight rebounds. Robert Williams III added 13 points, while Josh Richardson chipped in 11 points off the bench for the Celtics, who are now 13-12 on the season.

"I feel like our energy was great, especially starting off the game," Williams said in his postgame presser. "We just weren't ready for the punch in the second half, so we've got to clean it up. We tend to lay back and get comfortable when the game is going our way, and it's something we need to break."

Former Laker Dennis Schröder was booed each time he touched the ball, as he struggled from the field going 1-of-6, but also hit 8-of-10 from the free throw line to total 10 points and five assists.
The Celtics were also playing without Jaylen Brown, who was ruled out for the third straight game with right hamstring tightness.
After scoring an average of 137.5 points in their first two matchups of a five-game west coast road trip and Marcus Smart (six points, six assists) essentially guaranteeing the Celtics were on a verge of going on a run up the standings, they barely reached triple digits in scoring, while shooting a pedestrian 43.9% overall and 10-of-33 from beyond the arc.
LeBron James got his revenge from last month's blowout loss to Boston, by leading the Lakers with 30 points on 13-of-19 shot attempts and five assists. Russell Westbrook had 24 points, 11 assists, while Anthony Davis notched a double-double of 17 points and 16 rebounds to help Los Angeles get back above .500 at 13-12.
It appeared the Celtics were going to somewhat run away with the game early after Tatum scored the team's first 14 straight points on five shots -- including four 3-pointers. But James' 16 first quarter points kept it close, despite Boston taking a 33-30 advantage into the second.
The Celtics trailed 60-55 at the half before Westbrook scored 15 third quarter points to give the Lakers a 19-point lead on a dunk with 2:04 left in the period.
Boston never got within any closer than 10 the rest of the way, as coach Ime Udoka subbed out all his starters with just over five minutes left to play.

"We're disappointed as far as we were outhustled, out-toughed a little bit," Udoka said. "It hasn't happened in a long time. They would put their head down, get to the basket and get whatever they wanted. We're better than that defensively, but a lack of effort and a lack of toughness showed tonight."

The Lakers shot 51.6% from the field and outscored Boston 66-42 in the paint and won the battle of the boards 51-34 (including 13 offensive rebounds).
The Celtics are 1-2 on their road trip, as they'll face the Clippers Wednesday on a second night of a back-to-back. Tip-off is at 10:30 PM ET.

Boston forced 16 turnovers but committed 13 themselves, while dishing out 27 assists on 36 made baskets. The Celtics also missed 10 free throws, going 20-of-29 from the charity line and the Lakers had 25 dimes on 48 made shots.
Joel Pavón
Follow @Joe1_CSP