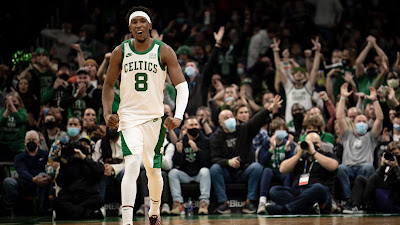 Josh Richardson has re-entered the NBA's Health and Safety Protocols, as he becomes the seventh Celtics player to be placed on the league's list.
The veteran guard, who was the hero in the team's 114-107 win over the New York Knicks Saturday night, had just re-joined his teammates less than a week ago once he cleared league protocols -- during which he missed two games against the Phoenix Suns last Friday and Milwaukee Bucks this past Monday.


There are 10 Celtics players who are on the latest injury report ahead of Monday night's matchup against the Philadelphia 76ers, who include Richardson, Al Horford, Grant Williams, Jabari Parker, Juancho Hernangomez, Sam Hauser and Brodric Thomas -- all in the league's health and safety protocols. Plus, three more are listed as questionable which include Dennis Dennis Schröder (non-COVID illness), Romeo Langford (neck strain) and the newest addition Jayson Tatum with a left ankle sprain.
The Celtics would be with only eight available players if all are unable to play against the 76ers. Boston's healthy players would be Jaylen Brown, Marcus Smart, Robert Williams, Payton Pritchard, Aaron Nesmith, Enes Freedom, Bruno Fernando, and newly signed forward Justin Jackson.
C's host Philly at TD Garden tonight, as tip-off is at 7:30 PM ET on NBATV.
Joel Pavón
Follow @Joe1_CSP