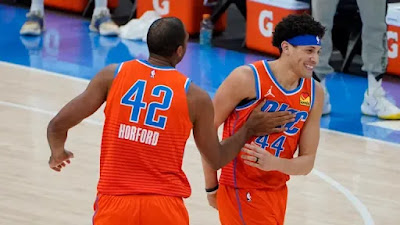 The Celtics have reportedly signed forward Justin Jackson via the league's hardship exception, according to The Athletic's Shams Charania.
The team is adding the 6-foot-8, 220 pound forward due to a string of COVID-related absences that currently has six players in the NBA's Health and Safety Protocols.


The deal is essentially a 10-day contract for Jackson, who has spent four years and played for four different NBA teams after being drafted 15th overall by the Sacramento Kings back in 2017. He has career averages of 6.6 points and 2.5 rebounds while shooting 42.7% from the field and 32.1% from 3-point territory in 248 games.
Jackson, 26, last played for the Oklahoma City Thunder (33 games), alongside veteran Al Horford and the Milwaukee Bucks (1 game) during the 2020-21 campaign.
While he has yet to play this season in the NBA, Jackson has appeared in 10 games for the Dallas Mavericks' G-League affiliate, the Texas Legends -- averaging 22.7 points, 7.6 rebounds, and 3.3 assists while hitting 47.3% from the field and 41.4% from deep.
It's likely that Jackson will be available tonight when the Celtics, who fell to the Golden State Warriors Friday, host the New York Knicks at TD Garden -- which tips-off at 7:00 PM ET.
Joel Pavón
Follow @Joe1_CSP