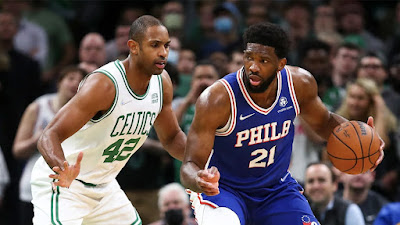 It wasn't pretty for the Celtics, as they held off the Philadelphia 76ers to secure a 88-87 victory Wednesday night at TD Garden.
Jayson Tatum led all scorers with 26 points on 9-of-20 shooting and recorded a career-high 16 rebounds to help the C's win two straight and are now 12-10 on the young season.

"I'm not really going to apologize for an ugly win," said coach Ime Udoka after the Celtics' lowest scoring output in over four years. "We did what we were supposed to do defensively. It happens."

Tatum netted 11 in the fourth quarter before Robert Williams, who returned after missing the last three games with the flu, swatted Massachusetts native Georges Niang's shot at the final buzzer to give Boston a win in their first meeting against longtime East rivals and former coach Doc Rivers.
Dennis Schröder had 13 points off the bench, while Williams added 10 points and three blocks.
Al Horford -- faced his former team for the first time since being traded last offseason to Oklahoma City -- finished with 10 points, eight rebounds and five blocked shots. The veteran big man left the Celtics as a free agent to sign with Philly in 2019 and was dealt after just one season, to which Horford called a "very low point."

"I was written off. I'm just glad I got another opportunity in a place I want to be," he said in his postgame presser. "There's a lot of satisfaction being back here and playing at a high level."

Horford was a huge reason behind Joel Embiid being limited to 3-of-17 shooting on the night.

"We challenged him to take pride in that matchup. He's a guy he knows well, playing with him, playing against him," Udoka said. "Al did have some excitement. ... He's a prideful guy. One stop, one blip on the radar doesn't define his entire career and I think he's shown who he really is."

Despite grabbing 18 rebounds, Embiid only had 13 points while Seth Curry led the Sixers with 17. Shake Milton added 16 points off the bench for Philadelphia, who fell to 11-11 on the year.
In a low scoring first half, the Celtics jumped out to a 13-4 lead to start the game, but the Sixers ended the quarter on a 16-7 run and Boston was up one heading into the second period.
By halftime the C's only led 44-40 even with the 76ers shooting 34.8% from the field and 3-of-15 from deep. On the flipside, Boston was at 45% from the floor and 5-of-15 from 3-point territory.
Philadelphia led briefly in the third between issues with their net having to be replaced at the start and near the end of the quarter, but the Celtics took a 64-63 advantage into the final frame.
Boston went up 88-84 with 38 seconds left on a Schröder quick drive to the rim for made layup. Danny Green responded immediately with a 31-footer from the top of the key to cut the deficit to one point on the other end.
Schröder drove again, but missed his shot attempt, which gave the Sixers a rebound and a chance to draw up a play when they called timeout with 6.1 seconds to play. Tobias Harris received the inbound pass and found Niang in the right corner, only to have Williams grab a piece of the final shot.

"It probably means a little more for myself, Al and Josh because we've been there," said Udoka on Boston's win over the trio's former team.

The Celtics will begin a five-game west coast road trip Friday in Utah before heading to Portland, Los Angeles and Phoenix.

Both teams were pretty even across the board, except Boston outscoring the Sixers 34-28 in the paint. Philadelphia shot 37.1% shooting from the field and 8-of-31 (25.8%) from behind the arc, while the Celtics hit 41.8% of their shot attempts and 11-of-28 (39.3%) from 3.
Enes Kanter Freedom played in his first game since legally changing his last name and becoming a U.S. citizen. The veteran big man was introduced with loud cheers as Enes Freedom with his jersey also bearing his official name change.
The Celtics center scored four points, grabbed seven rebounds and blocked a shot in 17 minutes off the bench.
Joel Pavón
Follow @Joe1_CSP