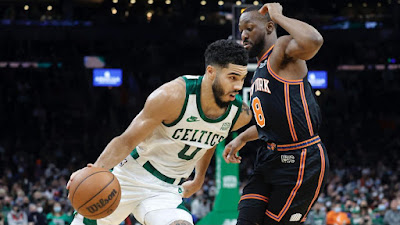 The NBA announced Monday afternoon that Celtics forward Jayson Tatum has been named the Eastern and Conference Players of the Week.
The All-Star averaged 31.3 points, 7.3 rebounds and 4.0 assists in three games this past week as the Celtics went 2-1, including a big win at home against the defending champions - the Milwaukee Bucks.

Minnesota Timberwolves center Karl-Anthony Towns and Boston Celtics forward Jayson Tatum have been named the NBA Western and Eastern Conference Players of the Week, respectively, for Week 9 of the 2021-22 season (Dec. 13-19). pic.twitter.com/nfy2e3sygv

Tatum dropped a season-high 42 points against the Bucks to go with five rebounds and four assists on 64% shooting from the field and 53.8% from 3-point territory on seven makes. He was a +21 on the court in the 117-103 win.
After four days of rest, Tatum nearly led the Celtics to a win against the best team in the league so far this season - the Golden State Warriors. He finished with 27 points on 9-19 shooting to go with eight rebounds and six assists in a 111-107 losing effort.
On a second night of a back-to-back, Tatum capped off the week against the New York Knicks with 25 points and nine rebounds to bring the Celtics back to .500 with two games left on their current homestand.
In the Western Conference, Minnesota Timberwolves big man Karl Anthony-Towns took home Player of the Week honors.
The shorthanded Celtics at 15-15 host the Philadelphia 76ers (15-15) tonight at TD Garden.
Joel Pavón
Follow @Joe1_CSP