Chris Mannix on young Celtics players' lack of playing time: 'What does this team have to lose at this point?' 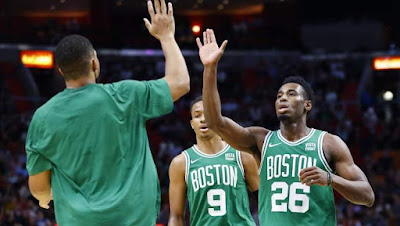 The Celtics are currently below .500 following a 1-4 five-game west coast road trip, in which Jaylen Brown didn't suit up once.
While the All-Star wing was recovering from tightness in his right hamstring, Ime Udoka was trying to seek the best rotations to overcome the absence of Brown. The results yielded a three-game skid with an average loss of 13 points per contest.
At 13-14 on the season, it might be time for the struggling Celtics to shake things up within their lineup that could mean more playing time for their last three first round picks of Payton Pritchard, Aaron Nesmith and Romeo Langford.
Despite none of these three seeing consistent minutes in Udoka's rotation so far, with Langford averaging the most at 18.3 (21 games), Nesmith is just around 9.8 (22 games) and Pritchard even less at roughly 9.5 (21 games) per contest -- they are capable of providing much needed scoring, playmaking and shooting.
After the Celtics lost 111-90 to the Phoenix Suns Friday night, where the team was also without Josh Richardson (NBA's Health and Safety Protocol), Sports Illustrated's Chris Mannix gave an interesting take on why Udoka should play his younger players more.

"Join the chorus of smart people saying play Aaron Nesmith, play Payton Pritchard, play Romeo Langford. These guys need to play," Mannix said on NBC Sports Boston's Celtics Postgame Live. "What does this team have to lose at this point?
"They have a 116.3 defensive rating in the month of December. They can't get any worse at this point. We heard (Celtics head coach) Ime Udoka talk about the lack of energy. Let's put one of those young guys in the starting lineup. Put Romeo Langford in the starting lineup right now. Show me where the opportunity is (for the young guys), besides three-minute spurts."

Former Celtics president of basketball operations Danny Ainge recently spoke about the team having much more depth than they did a year ago, especially when everyone is healthy, but with the additions of Dennis Schröder and Richardson its been tough for Pritchard and Nesmith to see the floor this season.

"We have seen what Aaron Nesmith and Payton [Pritchard] could do, they showed us what they could do last year," said Ainge during an interview this past Wednesday. "But there's just so much depth on the team, especially in those wing and outside-shooter positions, that it's tough. It's a tough place to coach because, when everybody is healthy -- but the team is at its strongest when their top guys are all healthy and when Robert Williams and Al Horford and Jaylen [Brown] and Jayson [Tatum] and Marcus [Smart], Schroder, all those guys. When everybody is healthy, the team is good."

Still, the trio of Pritchard, Nesmith and Langford showed promise over the past season and even in Summer League they put their talents and progression on display when given free reign to operate.

"You've got to give these young guys some room to breathe a little bit, Mannix added Friday night. "Aaron Nesmith at the end of last season was shooting like 40 percent from 3-point range over the final month or month-and-a-half. Payton Pritchard was a revelation all season last year. Both of these guys played great in summer league. Romeo Langford played well. He played well in the preseason.

"In the preseason and summer league they had a lot of room to breathe. They didn't have to feel like every mistake they made would get them yanked off the court. That's all I want -- an opportunity for these guys to play 30 minutes in a game."

If the Celtics want the trio to gain experience and develop they have to play more minutes. Nesmith has shown flashes of potentially becoming an excellent 3-and-D wing, but it wont come fruition if he's getting scraps for playing time in a blowout win or loss.
Pritchard needs to have that confidence restored again like the scorer and playmaker he was during his rookie campaign by getting some quality playing time, even in clutch late game situations if possible. Langford is quickly showing his improvements as a defensive player with an ability to also make plays when necessary on the other end.
With the Celtics desperately needing wins as they return to the TD Garden this week for a mini homestand, it wouldn't hurt to mix it up whether Brown and Richardson return fully healthy or not. It's time to see how far the investments put into these first-rounders go once given a little slack by their new head coach, who's also still learning on the job.
Joel Pavón
Follow @Joe1_CSP