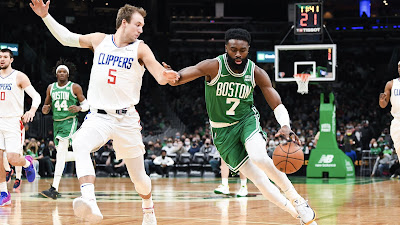 The Celtics made history in their 91-82 loss the Los Angeles Clippers Wednesday night and not a good way after hitting only 4-of-42 from 3-point territory -- a whopping 9.5% for the game.
It wasn't just another frustrating loss, the third straight since Christmas Day, but rather that all three were in fact winnable games, despite the the Celtics being shorthanded due to several players being in the NBA's Health and Safety Protocols -- including Jayson Tatum.
Brown, who went 1-of-13 from deep and 13-of-36 overall didn't record a single assist (the first player in league history to not have an assist on 36 attempted field goals since Antoine Walker back in 1998), is more telling of the team's shooting woes -- especially in the fourth quarter -- than the All-Star wing being a one-man show.
Still, Brown was visibly frustrated as he vented to the media following the Celtics' lowest point total of the season so far.

Though Brown finished with a game-high 30 points and the Clippers were held to the low 90s, its clear some steam needed to be let out.

"We got a lot of great looks and we didn't make them," Brown said. "I'm still confident. Despite what the statistics say, if you have an open shot you've gotta shoot it. I tell Romeo [Langford], I tell Payton [Pritchard], I tell myself, 'If you're open, you've got a good look, you've gotta take it.' I had good looks tonight.

The Celtics played with plenty of energy and effort, while taking care of the ball (only registered eight turnovers, which included three from Brown), but it seems to be one thing or another when it comes to these losses and especially in the fourth quarter -- this time it happened to be poor shooting from behind the arc.

"It's just a shitty game, and unfortunate because we wanted to come back and respond after playing so well in Minnesota," said Brown. "But I don't know what else to say. We didn't knock enough shots down to win. We played hard, but we ended up with a loss, so that's it."

At 16-19, Boston will look to take advantage of some home cooking at TD Garden and snap their losing streak when they host the Phoenix Suns (27-7) Friday afternoon in an attempt to wrap up the calendar year on a high note.
Joel Pavón
Follow @Joe1_CSP