Jaylen Brown out vs Lakers, hamstring still not 100 percent 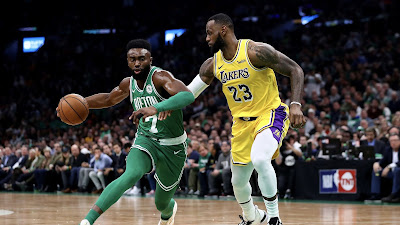 Jaylen Brown will miss his 12th game tonight when the Celtics face the Los Angeles Lakers on the road.
Brown has been ruled out with right hamstring tightness, the team announced hours ago after being downgraded from questionable following what Ime Udoka called a "good workout" Monday.

Per the Celtics head coach, the 25-year-old wing is not quite back to 100 percent yet, and as a result will miss his third consecutive game.
Brown strained his right hamstring back on Nov. 4 in a win over the Miami Heat. The All-Star missed the next eight games before making a return on Nov. 22 in a matchup against the Houston Rockets at home, but the Celtics shut him down following last Wednesday's victory over the Philadelphia 76ers.
After Tuesday game against the Lakers, Brown will have missed half of Boston's game this season, as the C's are scheduled to play the second of a back-to-back tomorrow night against the Clippers.
Al Horford (back) and Romeo Langford (ankle), who missed the Celtics 145-117 win over the Portland Trail Blazers, are back in the lineup tonight -- while Jabari Parker (non-COVID illness) and Bruno Fernando (back spasms) are out along with Brown.
Joel Pavón
Follow @Joe1_CSP