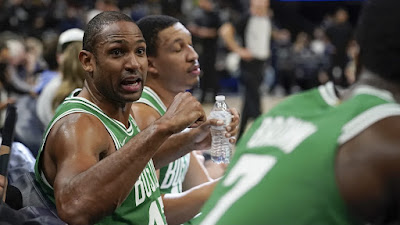 The Celtics are not only losing players to the NBA's Health and Safety Protocols these days but it also seems like they're dropping games to themselves, by continuing to blow double-digit leads in the fourth quarter.
Boston followed up an ugly Christmas Day defeat at the hands of the Milwaukee Bucks with probably the worst loss of the season to an undermanned Minnesota Timberwolves team on the road.
Ime Udoka was asked about what he told his roster after the game Monday night and the Celtics coach kept it straight forward by simply stating, "To get carved up the way we did tonight was embarrassing."

"One of the poorest losses of the year," said Udoka in his postgame presser. "A team that is depleted as we are just out-hustled us late in the game. And very undisciplined effort overall."

The Celtics coach pointed out specifically to a lack of defense in the fourth period, as the Timberwolves scored 34 points and shot 63.2% from the floor and 83.3% from behind the 3-point arc.

"Undisciplined defensively. Off-ball switching was an issue we got carved up there, something we've been doing decent-to-well all year, said Udoka. "And lack of communication there, so defensively that hurt. Undisciplined shot-taking as well… The off-ball defense was glaring."

Udoka also to some responsibility by placing blame on himself and his coaching staff for the loss and the team's recent play.

"Just poor overall job coaching, playing, getting ready for this game. Understanding what we need to do to win," said the C's coach.

Al Horford, who returned to the lineup after his second stint in the league's COVID protocols, finished with 16 points, nine rebounds and six assists against the T-Wolves -- gave his thoughts on the Celtics struggles.

"I believe, as professional athletes, we all have a job to do," Horford said in his postgame comments. "Coach addresses certain things. He shows us things we need to do. But at the end of the day, as an individual player, you have to take pride individually and look at yourself in the mirror and see how you can be better at things you need to do. It has to be something that has to be consistent.
"At the end of the day, you have to hold us accountable. All of us are out there," he added. "We have to be held accountable and we need to be better. I know we keep saying that. To answer your question, I think individually, we have to look in the mirror and it's not a numbers statement. It's different things within the game that we have to face in order to be better."

While Horford has always had the respect of his teammates as a quiet leader, Jaylen Brown has been viewed one of the more vocal ones in the locker room. Despite the All-Star wing scoring a team-high 26 points, he was 8-of-24 from the field and 2-of-8 from deep, to go along with six turnovers -- failing to provide that spark in Jayson Tatum's absence.
However, the 25-year-old did acknowledge that it wasn't his best performance, especially since he had been on a tear since returning from a hamstring injury.

"A lot of those turnovers came from miscommunications," Brown said to reporters after Monday's loss. "A lot of those defensive lapses came from miscommunications. That's just what it comes down to is chemistry and things like that. We didn't play well today. I didn't play well today. I let my team down for sure."
He continued: "The game isn't as hard as I made it tonight and I didn't play the way I know I can play. That was probably one of my worst games of the season as well. My team needed me to make plays and step up and I turned the ball over too much. I missed easy shots, easy reads, and we lost."

Meanwhile, when Brown was asked about Horford's "look in the mirror" remark, he seemed a bit annoyed while raising his eyebrows.

"Searching and looking in the mirror?" he said, "Nah. No comment."

The shorthanded COVID-depleted Celtics will have to do some sort of soul searching when they host the Los Angeles Clippers Wednesday night, followed by the Phoenix Suns on Friday to wrap up the calendar year.
Joel Pavón
Follow @Joe1_CSP