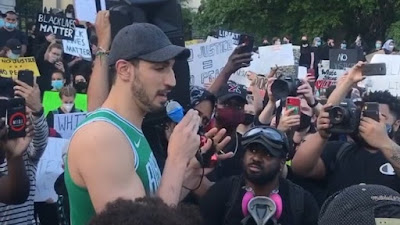 Floyd died last Monday after being taken into custody by Minneapolis Police and officer Derek Chauvin kneeled on his neck for several minutes, while Floyd repeated several times that he could not breathe.


"We want to come out here and let our voices be heard," Smart told NBC Sports Boston. "We stand for truth and we stand for justice, and we won't stop until we get justice, and that’s really what this is about. I just want to tell everyone who thinks this is something more than it is, it's not. Despite color or gender, the truth is the truth and justice is justice, and justice hasn’t been served, and people are pissed off about it.

"So, we're here to keep George Floyd's name alive, and keep it going, and his legacy. Something has to change and we’re here trying to make a change."

The #Celtics @smart_MS3 on why he's participating in the tonight's peaceful protest here in Boston. pic.twitter.com/KCiKufqonG
— A. Sherrod Blakely (@ASherrodblakely) May 31, 2020


The 6-foot-11 Enes Kanter, who wore his Celtics No. 11 jersey, was among the protesters in Boston Common before he briefly addressed the crowd.


"First of all, I want to thank you all for what you're doing," Kanter said. "I really, really appreciate it. The second thing I want to say is we need change. Change cannot wait, you know? I get emotional, but we are on the right side of history, man. You know what? Black lives matter, right? Let's go."


On Saturday, Celtics guard Jaylen Brown drove 15 hours from Boston to led a peaceful protest in Atlanta, just 20 minutes away from his hometown in Georgia. He was joined by Pacers guard Malcolm Brogden, who is also a fellow NBPA vice president.


"Being a celebrity, being an NBA player don't exclude me from no conversations at all," Brown said then. "First and foremost I'm a black man and I’m a member of this community…We’re raising awareness for some of the injustices that we've been seeing. It's not OK."