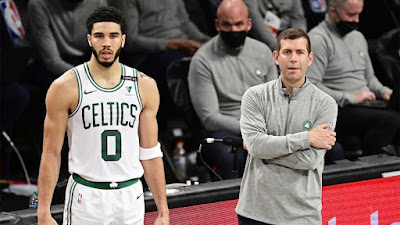 Celtics president of basketball operations had plenty to say on the subject of Jayson Tatum during his weekly appearance on Boston's 98.5 The Sports Hub.
Stevens ripped recent comments reportedly made by an anonymous Eastern Conference assistant coach that questioned the All-Star forward's attitude and called him a selfish player.
"If you can't put your name on it, don't say it," Brad said in response to an article by NBA insider Tim Bontemps of ESPN, who spoke with executives and coaches around the league about Tatum and the Celtics' up and down start to the 2021-22 campaign.

"Jayson Tatum is about Jayson Tatum," said the anonymous source via ESPN. "I don't think he cares about winning now, and if he does, it is on his terms. He doesn't want to score 15 and win. He wants to score 39 and win."

On Thursday, Stevens called the quote "absolutely ridiculous, to be honest," while further defending Tatum, who he coached for four years.

"There is no way that assistant coach would put his name on that quote because, first of all, he has never been around Jayson," Stevens said on "Toucher & Rich." "And, secondly, Jayson would kill him every time he played him for the rest of his career. That's the way those guys in this league are wired.

"To me that line was a joke, because I'm around [Tatum] every day. You look at him, he plays, he's available, he competes, he's got a lot on his plate. He's done a lot more in his first five years in the league than most of the league, right? Totally, totally wrong in that guy's assessment."

Despite early season struggles, where Tatum is averaging a career-low in field goal percentage at 39.7% and 31.9% from deep, he found other ways to contribute in the Celtics' last two wins against the Toronto Raptors by handing out 10 assists and recording a double-double of 26 points and 16 rebounds against the Philadelphia 76ers.

"I just want to contribute and help us win," said Tatum in his postgame presser Wednesday. "I saw a report the other day that said I was a selfish player. That seems pretty unselfish of me. There's 82 games. Sometimes you need to play off the ball too."

While Tatum acknowledges the criticism, his main focus is still to win basketball games, something Stevens has never had to question.

"I don't ever react to that stuff, said Tatum's former coach. "I actually sent a note to one of the people I work with like, 'This is idiotic.' Just be around this guy every day. That guy loves to win. He's sitting there with his feet in the ice bucket after every game that we lose, and he looks despondent. This guy's competitive. I know that for a fact. I'm glad he's on our team."

Tatum and the Celtics (12-10) are set to begin a five-game west coast road trip, which begins on Friday in Utah against the Jazz, before heading to Portland, Los Angeles and Phoenix.
Joel Pavón
Follow @Joe1_CSP