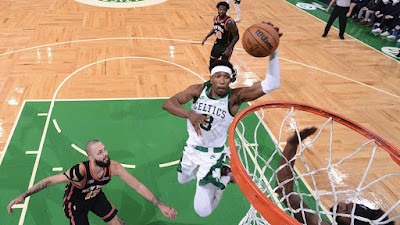 The Celtics held on to beat the New York Knicks 114-107 Saturday at TD Garden despite each team missing six players due to the NBA's Health and Safety Protocols.
Josh Richardson scored a season-high 27 points on 9-of-14 shooting, including going 4-of-7 from deep in 32 minutes off the bench.

"Being off mentally for five days was obviously good for me," said Richardson in his postgame presser about also being out last week in COVID protocol. "I was pushing myself when I was out. I was thankful to get those negative tests quickly and come back."

Jayson Tatum had 25 points and nine rebounds, while Jaylen Brown added 23 points, five assists and Robert Williams chipped in 15 points and eight rebounds for the Celtics, who are 15-15 on the season.
Boston playing without Al Horford, Grant Williams and Romeo Langford (neck), among others, only used eight players, including Payton Pritchard (16 points on 6-of-10 from the field).
Former Celtics guards Evan Fournier (32 points) and Kemba Walker -- who had been out of the rotation since Nov. 26 -- finished with 29 points in their Boston return to lead the shorthanded Knicks. Julius Randle netted 20 points and Alec Burks chipped in 19 for New York, who have fallen to 13-17 in the standings.
Boston had a comfortable 62-47 advantage at the break, while limiting the Knicks to just 37.5% shooting from the floor, before New York used a 23-5 run to open up the second half and take their first lead of the night on a Walker 3.
The Celtics trailed 88-86 heading into the final frame, as the Knicks outscored Boston 40-24 in the third quarter.

"We just had a little lapse there and picked it up where we left off in the first half," Celtics coach Ime Udoka said after the win. "A few mistakes there, but overall three great quarters of defense."

Richardson hit back-to-back jumpers, including a go-ahead 3 less than two minutes into the fourth quarter that put Boston up for good. Tatum's 3-point play gave the Celtics a 104-97 lead with 5:35 left to play, but New York kept it a two-possession game until Robert Williams III had a dunk, making it 109-102 with 3:14 remaining.
With the Knicks still down five, Walker fouled out at the 2:06 mark and Richardson's 3 from the left corner sealed the win with 33.3 seconds left.
The Celtics at 2-1 on their five-game homestand, will host the Philadelphia 76ers Monday night.