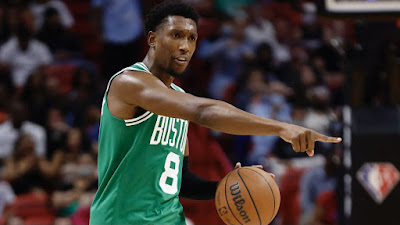 The Celtics could have a clean bill of health come Friday when they host the Golden State Warriors at TD Garden with the return of Josh Richardson.
The veteran guard missed the last two games against the Phoenix Suns and Milwaukee Bucks after being placed into the league's Health and Safety Protocol last Friday.
Richardson was ruled out just hours before the Celtics' loss to the Suns and stayed behind in Arizona to quarantine when the team traveled back to Boston. However, he was cleared to practice Wednesday afternoon after just six days in isolation.
According to C's coach Ime Udoka, it's unclear if Richardson had a false positive COVID-19 test, but he is expected to be available Friday night against the Warriors.

The Celtics are looking to build off their strong showing against the Bucks Monday night, in which Jaylen Brown made his return from an hamstring injury and there has been no setbacks to report since.

"I mean, you look at the standings obviously and see how tight it is," Udoka said of the Eastern Conference. "A lot of teams hovering around that .500 level. So you're somewhat confident that you can get back in the mix, obviously, if you put a run stretch of games well. But it's more so one at a time and looking at the next game instead of looking ahead and the players, we're definitely not asking them to do that.
"But we start to look at games that you had a chance with, that you may have given away some early and you want to get those back and know where you would be if you had taken care of business. So something that we're conscious of and want to string a few good games together. As I've mentioned before, we're not looking at opponents or the home stretch. We do have 15 out of 20 here, but that’s not just an automatic that because we're home, we want to play well and string some together an get some consistency going."