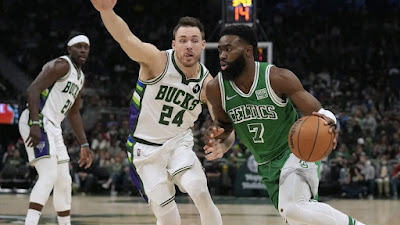 The COVID-depleted Celtics couldn't hold on to a 19-point lead in a 117-113 Christmas Day loss to the Milwaukee Bucks at Fiserv Forum.
Jayson Tatum finished with 25 points, nine rebounds, while Marcus Smart had 19 points, seven assists and Payton Pritchard added 16 points, five assists off the bench.
Jaylen Brown scored 14 of his 25 points in the first quarter and Robert Williams added a double-double of 11 points, 14 rebounds for the Celtics, who fell to a below .500 record of 16-17.
Boston had nine players out in the NBA's Health and Safety Protocols, including Dennis Schröder  --who was ruled out less than two hours prior to tip-off.
Giannis Antetokounmpo led all scorers in his first game back from being in league protocols, with 36 points on 13-of-23 shooting to go along with 12 rebounds. Khris Middleton had 17 points, seven assists, Jrue Holiday also netted 17 and Bobby Portis added 16 points, 10 rebounds for the Bucks -- who improved to 22-13 on the season.
The Celtics led 35-22 after one and 62-47 at the break, as Antetokounmpo was held to just seven points in the first half.
That would quickly change for the reigning NBA Finals MVP, who scored 17 points in the third quarter alone to help the Bucks trim a 19-point deficit to one with 3:40 left in the period.
Boston took a 94-90 advantage into the final frame before using an 8-0 run to push it to 102-90 with 10:15 left to play.
Antetokounmpo, who scored 12 points in the fourth, tied the game 111-111 to cap a Milwaukee 21-9 spurt with 1:26 remaining. Wesley Matthews hit a go ahead 3 to put the Bucks up 114-113 at the 30.3 seconds mark and Middelton hit a pair of free throws to increase the lead.
On the next C's possession Williams' dunk attempt was blocked by Antetokounmpo to ice the win for the Bucks who are 1-2 against Boston so far this season.

"I think we can only go up from here," said Pritchard in his postgame presser following the loss. "We're learning how we're gonna finish games. So for us, we've got to take it as a good thing. We're growing, so eventually we'll get good at that area and we'll then be able to take care of it."

Boston was outscored by the Bucks 70-51 in the second half, as their field goal percentage dropped from 48.8% in the first two quarters to 42.7% for the game, as they also shot 7-of-22 from deep in the final two periods. The Bucks were limited to 38.8% shooting at the break, but finished with 47.3% from the floor, while hitting 7-of-16 from behind the 3-point arc after only making 5-of-17 by halftime.

"We have to figure out as a team and a coaching staff how to maintain these leads," said coach Ime Udoka.

The shorthanded Celtics will head to Minnesota on Monday night to face the Timberwolves (15-17).

Boston was outscored by the Bucks 56-28 in the paint and outrebounded 48-44, while both teams handed out 24 assists. The Celtics are now 15-20 all-time on Christmas Day and Milwaukee is 5-3, including 3-0 at home.
Joel Pavón
Follow @Joe1_CSP