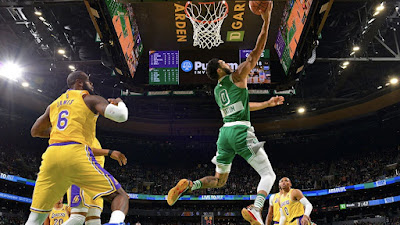 Jayson Tatum was the one who shined the brightest on the biggest stage Friday night, as the Celtics beat the Los Angeles Lakers 130-108 at TD Garden.
With legends Bill Russell and Paul Pierce in attendance, the 23-year-old All-Star forward put on a show, going off for 37 points (13-of-26 shooting and 4-of-9 from behind the arc), to go along with 11 rebounds, three steals and a block in 34 minutes of action.

"It's a surreal moment, obviously, Bill Russell and the impact he had on the Celtics and the NBA," Tatum said during his postgame presser about playing in front of Hall of Famers. "Having someone like Paul come to the game and someone I have a relationship with.

Tatum started 1-of-5 from the field and the Celtics fell behind by 14 in the first quarter before he settled in and drove to the rim to score a handful of baskets on his way to spoil LeBron James' return -- after an eight-game absence with an abdominal strain.

"We want him to make quick decisions," Boston coach Ime Udoka said of Tatum following the win. "We like some of the matchups he had, he could use his size, but he did it from everywhere tonight, isolations, post-ups, pick-and-rolls. And so, when he's extra aggressive like that, getting downhill, he knows the crowd that he draws, they're going to double him, and he got off the ball, which he's done all year."

Marcus Smart went 9-of-13 from the floor to finish with 22 points, eight rebounds and six assists, while Dennis Schröder added 21 points against his former teammates after being listed as questionable before tip-off with an ankle sprain that he sustained Wednesday in the Celtics' loss to the Atlanta Hawks -- another one of his former teams.

"I had to be here for that one tonight, so I made it work," said Schröder in his postgame comments about his ankle still being sore.

Al Horford netted 18 points and Josh Richardson chipped in 15 points off the bench for the Celtics, who are back up to .500 at 8-8 on the season.
Anthony Davis led Los Angeles with 31 points on 12-of-21 from the field and James had 23 points in his first game back after nearly 20 days off.

"I felt OK," James said after the game. "Obviously being out 2 1/2 weeks, I felt kind of like a rookie again, just being away from the game. Excited. Felt good enough that I could trust my body."

Carmelo Anthony contributed with 13 points off the bench, while Russell Westbrook struggled with 5-of-13 from the field to score only 12 points and hand out six assists for the 8-9 Lakers.
The Celtics trailed 38-30 to start the second quarter and eventually erased a 14-point deficit to take a one point lead (their first of the night) on a Tatum layup with 4:39 left in the half. His go ahead 3-pointer a minute later led to both teams exchanging baskets the rest of the period, as James put the Lakers up 61-60 at the break on a steal and layup.
Boston opened up the third on a 14-4 run and never looked back, taking a 93-82 advantage into the final frame on their way to leading by as many as 25 points and outscoring the Lakers 70-42 in the second half.
The Celtics were playing without Jaylen Brown (hamstring strain) -- missed his seventh straight and Robert Williams (knee) for the second consecutive night, as both were ruled out after being downgraded from questionable just prior to game-time.

"We're not perfect, but the fight is within us," Smart said to reporters postgame. "It may not look like it right now, but we're going to turn this around."

It was a rocking Garden crowd from begin to end in a game between two of the biggest rivals -- arguably in all of sports -- with both the Celtics and Lakers owning 17 NBA championships apiece. Then of course the famous chants of "Beat LA" echoed throughout the arena on several occasions. But the loudest cheers of the night came when Bill Russell (standing obviation) and Paul Pierce were shown on the jumbotron sitting courtside, as both entered the Hall of Fame (Russell as a coach) earlier this year.
The Celtics will play the second night of a back-to-back at home when they host the Oklahoma City Thunder (6-9) Saturday night.