Enes Kanter to change his last name to Freedom 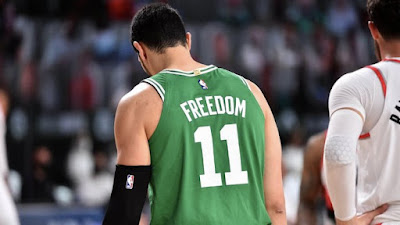 Celtics center Enes Kanter is officially changing his name to Enes Kanter Freedom, according to Shams Charania of The Athletic.
Kanter will be the veteran big man's middle name and Freedom will be his new new last name before he's set to become a U.S. citizen on Monday.

Boston Celtics center Enes Kanter is legally changing his name to Enes Kanter Freedom, @TheAthletic @Stadium learned. Kanter will be his middle name, Freedom is his new last name. He becomes a U.S. citizen on Monday.


After years of exile from his native country of Turkey, including getting his passport revoked by the Turkish government, plus having his father put in jail and later released, Kanter will earn U.S. citizenship. The C's center has publicly criticized Turkish President Recep Tayyip Erdoğan, as Kanter was accused of family terrorism back in 2017.
Kanter has been in the headlines throughout the young season, while using his social media to promote campaigns against the Chinese's government, while supporting pro-Tibet movements. He's also targeted Nike, calling out LeBron James and Michael Jordan, who represent the company, in the process. Due to being so outspoken towards China, Celtics games, along with those of the Philadelphia 76ers, have not been aired on Chinese airways.
Despite Kanter not seeing much action to start the year -- something that Celtics coach Ime Udoka says was strictly basketball reasons -- he's seen an increase in minutes as of late. In his last five games he's averaging 5.8 points and 7.2 rebounds per contest. With Robert Williams out cause of a non-COVID illness, Kanter has taken advantage of available playing time.
Joel Pavón
Follow @Joe1_CSP