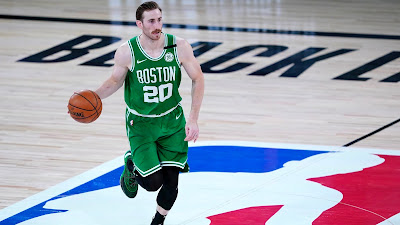 According to Celtics coach Brad Stevens, Gordon Hayward could re-join his teammates in the NBA bubble very soon.

However, the Celtics forward is still far from returning to any game action. Hayward, who left Orlando just over a week ago after suffering a Grade III ankle sprain in Boston's Game 1 win over the Philadelphia 76ers. He's expected to be sidelined four weeks, which could possibly mean a mid-September target date at best.


"Rehab seems to be going OK," said Stevens. "He feels a little bit better. Still has a pretty significant amount of — I don't think his gait is perfect yet. Once his gait feels right and becomes perfect, he’s probably on a quicker course to coming back. I think he'll rejoin us in the bubble at some point soon but he still will be some time away when he does do that."

Boston has not missed a beat in Hayward's absence, as they swept the Sixers in round one and beat the Toronto Raptors in Game 1 of their Eastern Conference semifinals on Sunday. It doesn't seem likely Hayward would return before the end of this series, with Game 7 being scheduled for September 11 if it goes that far.

While Marcus Smart has been plugged into the starting lineup in Hayward's place, the Celtics forward could be a key piece for the team's postseason run. Hayward was already planning on leaving the bubble this month for the birth of his fourth child and he would have to quarantine for at least four days upon returning -- meaning more games could be missed depending on the delivery date for his wife, Robyn.

In the meantime, the Celtics avoided another injury setback to their starting lineup when All-Star Kemba Walker appeared to have hurt his left knee while defending a driving Pascal Siakim in Game 1 against the Raptors.

The Celtics guard said it felt a little sore afterwards but his knee responded well to treatment the next day.


"Felt good, felt good actually. Tweaked it a little bit, but it's the nature of the game. It happens," said Walker on Tuesday. "For the moment, it bothered me a little bit, but my adrenaline was pumping. A little sore last night but I got some treatment. Doing everything I can to stay on top of it. I felt really good today, actually. Hopefully I can continue to feel this way."

Boston looks to take a 2-0 series lead over the Raptors, as Game 2 tips-off tonight at 5:40 pm EST on ESPN.