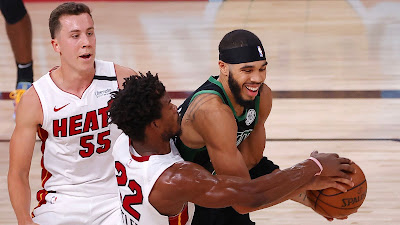 The Celtics once again blew a double-digit lead in the second half, as the Miami Heat rallied to win 106-101 in Game 2 and take a 2-0 Eastern Conference Finals lead Thursday night.

Boston surrendered a 17-point advantage, while the Heat used a 20-point swing in the third quarter and are now two wins away from going to the NBA Finals.

Goran Dragic led Miami with 25 points and Bam Adebayo recorded a double-double of 21 points, 10 rebounds. Duncan Robinson went 6-of-12 from behind the arc for 18 points and Jimmy Butler, who shot poorly (4-11) added 14 points and had three out of his total four steals in the final 3:50 of the game to deny the series being all knotted up.

Kemba Walker finished with 23 points, 7 rebounds and Jaylen Brown netted 21 points on 8-14 shooting. Jaylen also scored 21 points and Marcus Smart chipped in 14 points for the Celtics, who have given up a double-figures lead in four of their last seven games.

Miami was 0-21 in playoff games when losing by 13 points or more at halftime and the 17-point comeback matched the biggest comeback in Heat postseason history. This is the 11th time that coach Erik Spoelstra has had a 2-0 series lead and has not lost in his 10 previous occurrences.

The Celtics limited the Heat to 18-first quarter points for the second straight game and had a comfortable 60-47 lead at intermission before being outscored by Miami 37-17 in the their quarter.

Bam Adebayo, who was the defensive hero in Game 1, went 7-of-8 from the field for 15 points after having only four points in the first half. Boston shot 4-of-12 from the floor in the period and trailed the Heat 84-77 heading into the final frame.

The Celtics used a 15-2 run to get right back within the first seven minutes of the fourth quarter to go up 94-89 following a 3-pointer by Walker with 4:25 left to play. Miami had one more rally left in them, going on a 17-7 spurt to finish the game. Brown missed a game-tying 3-pointer and Butler sealed the win with a pair of free throws with 7.4 seconds left to play.


"We pulled apart and we didn't play well," Celtics coach Brad Stevens said. "And they did a good job. We're not beating this team if we're not completely connected on both ends of the court. So, got to get back to being that, which we've been at times. But right now, they're a better team. We're going to have to fight to get back in this series."

To make matters worse in the loss, the Celtics reportedly had a loud, animated blowout in their locker room after the game -- lead by Smart and several others. The team tried to downplay the shouting match, but media members could hear players cursing and even things being thrown.


"We're frustrated," said Tatum postgame. "But that's team sports. Not supposed to be happy we're down 0-2. But that's nothing out of the ordinary. Just talking about the game. It's cool."

Boston now finds themselves in a must win situation as they head into Game 3 on Saturday night, which will tip-off at 8:30 pm EST.

The Celtics, who shot 50 percent from the field, were 21-0 this season when shooting at the percentage or better. Boston out-rebounded the Heat 51-42, but finished with 20 turnovers. Miami assisted 27 times on 40 made baskets.