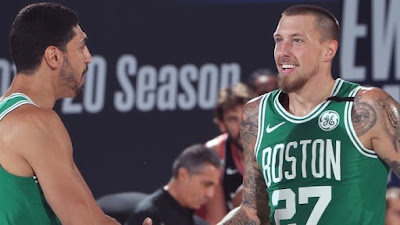 The Celtics turned it around in the second of half of Game 5, as they avoided being eliminated from the Eastern Conference Finals with a 121-108 win over the Miami Heat.

Outside of Jayson Tatum and Jaylen Brown combining for 59 points and 18 rebounds, the play in the middle of Daniel Theis and Enes Kanter didn't go unnoticed in the Boston's quest to save their season Friday night.

The Celtics' big man duo combined for 23 points, 17 rebounds, 3 assists and 3 blocks, while limiting Heat All-Star Bam Adebayo to 13 points on 5-of-11 from the field and 8 rebounds for his first non-double-double since Game 1.

"We got a lot out of that center position tonight," said Celtics coach Brad Stevens. "That's important."

Kanter immediately set the tone in the second quarter when he first checked in, after not playing at all in Game 4 and with the Celtics down 10, he scored two quick baskets within the first 60 seconds of being on the floor. In the next nine plus minutes, he had eight points, four rebounds and two assists, while the Celtics still trailed 58-51 at the break.

"Just kind of kept us at bay," Stevens said of Kanter's second quarter energy. "We were struggling. They hit some really tough shots. (Duncan) Robinson was going nuts. Kanter's points there in the paint I thought really helped. That kind of helped steady us, give us a chance at halftime, only being down seven."

Tatum also credited Kanter for always staying ready to contribute and do what's asked of him at a moments notice.

"He's in a unique situation where he never knows when he's going to play, but he's always ready to give us that boost, that spark at both ends, especially rebounding it and getting the ball in the low post," said Tatum after the game. "That just shows how good he is. He's a professional. He's always ready."

The play of Kanter set up the Celtics for a comeback in the second half and for most that were watching expected to see him re-emerge as a starter in the third, Stevens called upon Theis instead and he did not disappoint.

Theis' impact was felt on both ends of the floor, tallying 10 points, 11 rebounds and 3 blocks in nearly all of the last 24 minutes of action to clinch the game. The German big man finished with a total of 15 points, 13 rebounds and three blocked shots, for his first double-double of the series and since Game 1 against the Toronto Raptors in the second round.

"He was great in the middle of the zone," Stevens said of Theis. "He caught it twice and scored. He was great there on the glass on both ends."

Brown gave Theis his high praise and reminded the media that he's been a huge part of the Celtics' success this season.

"Anytime Theis is great, it's great for our team," Brown said. "He probably doesn't get the credit he deserves."

Stevens trusting his veteran bigs in a win-or-go home Game 5 paid dividends as Theis and Kanter were the unsung heroes of the night.

With the series now 3-2 in the Heat's favor, Celtics will get another opportunity to extend their stay in the NBA bubble come Sunday night in Game 6.